Some weeks ago, CCTV footage taken at a school in Ireland went viral after it allegedly shows paranormal activity caught on camera but whoever the ‘ghost’ or ‘poltergeist’ might be, it isn’t done scaring people away from the school.

With Halloween fast approaching, we’re expecting a lot of stories about ghosts and spirits but it seems that Deerpark CBS of Cork, Ireland has upped the ante by posting yet another spooky footage taken at a hallway in the school.

The video wasn’t as spooky as the first one but considering this is the second time this has been recorded in the school, perhaps it is time the school did something about it – like offer a mass or re-dedicate the school in a blessing?

In the clip, the hallway appears empty just like the first one. 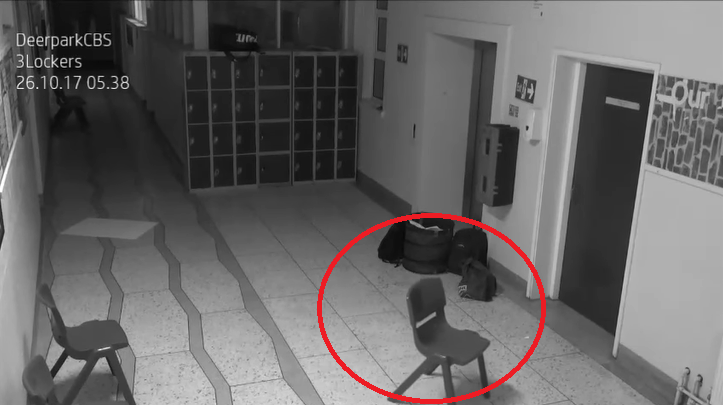 After a few seconds, a chair moves even if there was no one around. More chairs would be moved in the video, with one even moving across the hallway.

A bag is also pushed/ejected by some unknown force from the top of the lockers towards the floor while some posters were torn off the walls!

This spooky incident has again sparked netizens’ internet, with many still unsure whether they should believe that the video was really that of a real haunting or just an elaborate prank.

Besides, many are surely wondering why the school’s official media page is doing the posting, especially considering this might be too spooky for the students who believe in ghosts and bad spirits. This might even lead to a drop in enrollment!

Well, whatever the school’s reasons for doing it, the video did go viral again. Check it out and tell us whether you think that the video is just a prank or an edited clip: