The race marshals during the Unilab Active Health Run United 1 held last March 13, 2016 in Pasay City, Metro Manila, Philippines were baffled to see a beggar joining the race. They were not sure what to do about this man who appears to be a nuisance runner at first glance; after all, he could potentially disrupt the race.

But the marshals were soon surprised to learn that the guy actually had the right to run the race because beggar-looking that he might be, he has his own race bib – and upon checking, it is a valid race bib! Hmmmmm…

And the race marshals soon found out that not only was this ‘beggar-runner’ a valid race contestant, he is not really a real beggar but a duathlete named Larry Ronquillo who ran in beggar costume to raise an advocacy in the race community. 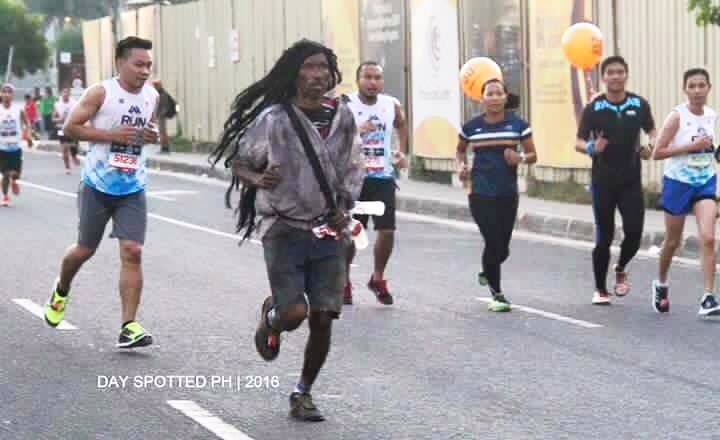 You see, there are thousands of people who join various races across the country every month yet many of them run for the sake of the race, not minding that they are also trailing trash along the way. More concerned with reaching the finish line, for example, these racers rush from the water stations with plastic cups still in hand, then simply throw the trash along the route without thinking about the consequences of their actions.

This is one of the reasons why Sir Larry dressed down as a beggar. In his garb, he picked up trash left by other runners along the way.

It did not matter to him that this action was definitely slowing him down and would take away his chance of getting any of the top ranking medals yet he knew that his actions would be noticed by people (and possibly by other runners) so that his efforts will not be in vain.

Race bibs are simply numbers printed on durable, plastic-like material that could withstand sun and rain but does not interfere with the runners’ movement.

The race bibs are distributed to runners along with other stuff in the race (such as t-shirts, caps, flashlights, or relevant material) they can use throughout the race. The numbers printed on the race kits help race marshals keep track of the runners.