When a 6.5-magnitude earthquake hit Mati, Davao Oriental in the early hours of September 24, local news outlets immediately reported the situation – thankfully, there were no damages and casualties in the quake but while reports like this would have been ignored by most netizens in the past, this one became quite viral because it happened in Davao.

A number of anti-Duterte people immediately commented on the news report – and many of them are putting the blame on President Rodrigo Duterte who hails from Davao City.

These Duterte bashers claimed that Duterte is bringing bad luck and karma on his kababayans after everything that he’s done, from the extra judicial killings to bad mouthing famous personalities like the Pope, Barack Obama, and many others. 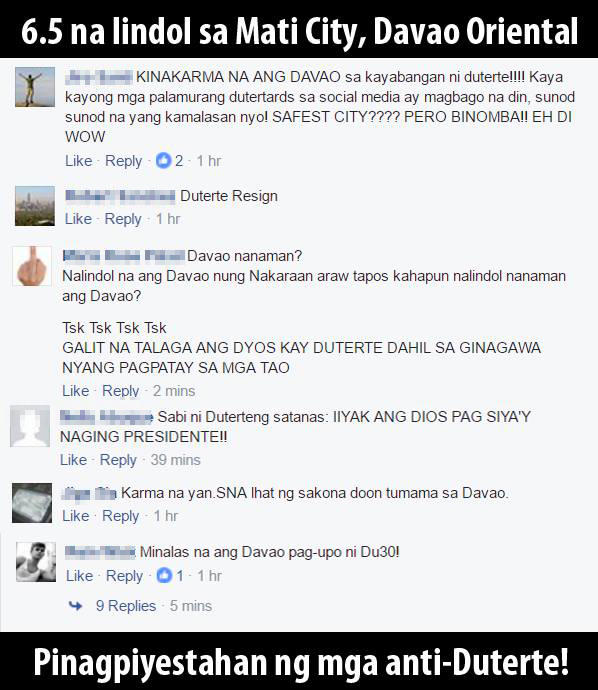 What these bashers failed to remember is that earthquakes happen everywhere and anywhere in the world, with or without a sinning president. Moreover, these people should really need to undergo a refresher course on geography and history because, first, they should know that Pres. Duterte is from Davao City and it is a very different place from Mati, Davao Oriental.

Just because a place has the word ‘Davao’ does not mean it is the same place.

Also, although the earthquake’s epicenter was in Mati, Philippine Institute of Volcanology and Seismology (Phivolcs) revealed that the quake was also felt in other areas.

These areas felt an intensity 4 quake:

While these areas felt an intensity 3 quake:

Still, even if Mati and Davao City are two different places or just the same place, this does not give anti-Duterte critics and bashers the right to laugh at those who experienced tragedy or calamity. No one deserves bashing in the time of calamity!