A guard who was just doing his job at a Robinson’s Mall supermarket suffered abuse from an angry customer who made him eat the store receipt she left at the counter.

The incident was caught on camera by another customer queuing at the counter near the spot where the woman was making a scene.

According to netizen Joemar Ortega who witnessed the incident and took a video on his smartphone, this happened at Robinsons Supermarket Palawan in Puerto Princesa, Palawan in the Philippines. 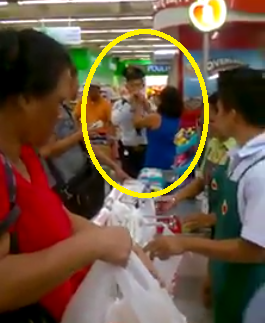 While Ortega was not able to record everything that transpired, he revealed that the guard had asked the woman for her receipt but this angered the woman who had actually left it at the counter.

Perhaps she felt embarrassed that the security guard asked for the receipt but the woman responded so angrily, taking the receipt from the cashier and putting it inside the guard’s mouth. In Bisaya, she told the guard that he could eat the receipt as he was so greedy for it. 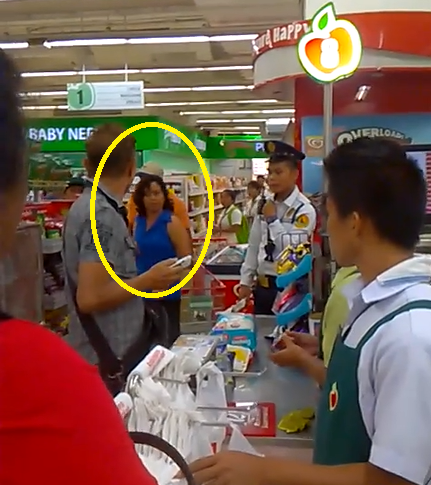 Of course, the security guard was just doing his job – and that is to check if customers are actually paying for the stuff they take outside the supermarket; thus, many people got angry at the woman for insulting the guard and making a scene over something so simple.

After all, she could have just taken the receipt back at the counter and shown it to the guard without needing to make such a scene.

Because of her actions, she has now become a hit on social media; though in a way that one wouldn’t want to be in…

Many people also expressed admiration at the guard who kept his calm despite what the old lady is doing to him.

Bisaya is a group of languages also known as Binisaya or Visayan. It is spoken mostly by people who live or come from the Visayas and Mindanao part of the country. Not everyone living in these areas speak the language, however, as there are parts where Tagalog/Filipino or some ethnic language are used.