Despite not personally knowing the 10-year-old boy who was hit by a motorcycle, Filipino actor Ian de Leon picked him up and rushed him to the hospital. The actor’s quick action and kindhearted deed saved the boy’s life.

The child’s mother, Kristine Madrigal Sarmiento, took to social media to thank the actor for his good deed as well as ask netizens for help so she could contact de Leon and personally thank him for what he did for her son.

“Does anyone know how to get in touch with Ian de Leon, the actor and son of Nora Aunor and Christopher de Leon?” Sarmiento wrote in the post. “I would like to personally thank him for rushing my son Ethan to the emergency room after he was hit by a speeding motorcycle.” 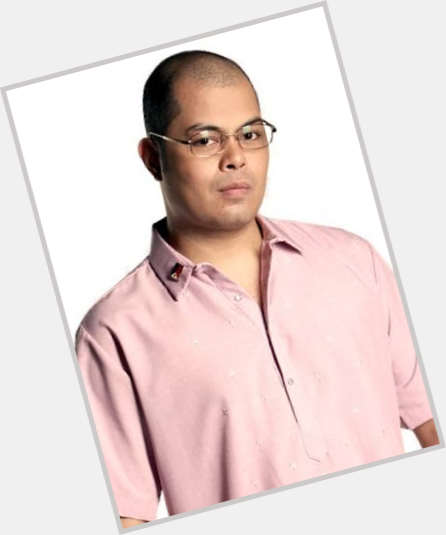 It turns out the child had been biking along Aguirre Avenue, Parañaque City in the Philippines when he was hit be the motorcycle. The child pleaded for the onlookers to help him but no one did.

At a nearby Shakey’s outlet, de Leon had seen the incident unfold right before his eyes. He rushed to Ethan and brought him to Las Piñas Doctors Hospital but not before he run after the rider who had hit the boy. He had the guy held at Robinsons Place Las Piñas while he took the boy to the hospital.

de Leon also stayed with the boy until his family members arrived, leaving only when they came so that he could go back to the mall to speak with the rider who hit the boy.

Although de Leon would later download the Good Samaritan act, saying that he was only doing what any other person would have done in the same situation, Sarmiento revealed that this was not the case. “He was the only one who came to the rescue of a total stranger ,while all the other people just passed by and looked at my bloody 10 year old helpless son who was alone when the incident happened,” she wrote.

Sarmiento did not know the identity of the guy who saved her son until later; thus, she was not able to speak with him directly and thank him. Thus, she wrote, “Such an act of kindness should be emulated by everyone! Not too many Good Samaritans around anymore. Please help me get in touch with him.” 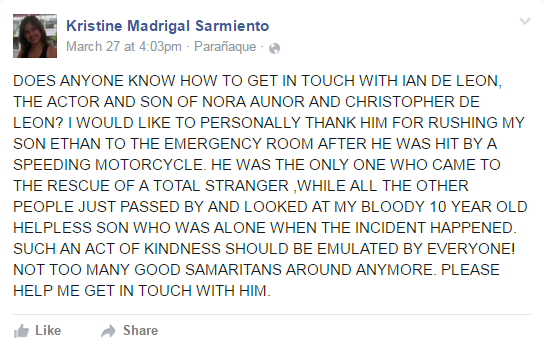 Some people were soon able to connect Sarmiento with de Leon and she has since thanked the actor for his kind deed. The two have not yet scheduled their meeting but Sarmiento prefers that this would be a private meeting, without media coverage.

As for the rider, he turned out to be a security guard working at a call center in Makati. He apologized to Sarmiento and the latter readily forgave him, saying that nothing would come out of the case even if they put him in jail.