At age 2, Jeremy Shuler was already reading books in both Korean and English by himself – and he finished reading ‘The Lord of the Rings’ series at age 5; so, his parents did not bother enrolling him in preschool as it really was ‘pointless’ to do it by then. Amazingly, at age 12, this boy is already off to college – at an Ivy League school at that!

Jeremy’s parents were both aerospace engineers in Grand Prairie, Texas, but the two decided to move to Ithaca, New York to support their boy’s dream of going to college.

Mommy Harrey Shuler admitted that she had put her doctorate in aerospace engineering on hold just to homeschool Jeremy when they realized he was different. Not only did she teach Jeremy her native language, Korean, she also imparted her engineering knowledge on her son.

Daddy Andy Shuler works in Lockheed Martin in Texas but was able to get a transfer to the company’s upstate New York location. He had received his doctorate from Ivy League school, Cornell University, while his dad (Jeremy’s grandpa) is a professor there. Still, it was with great amazement that the school accepted little Jeremy at age 12, making him the youngest student on record at the university. 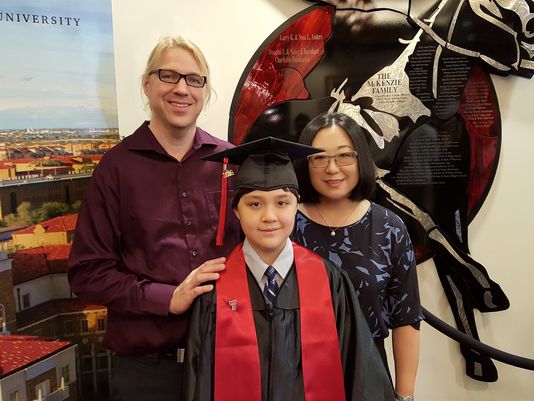 What’s even more amazing is that he could have been accepted at the school by age 10 as he had elite-level SAT and Advanced Placement test scores in math and science; however, the Cornell Engineering Dean Lance Collins wanted to make sure he had “a nice, safe environment in terms of growing up”; thus, he encouraged the boy’s parents to move from Texas so they can always be there for Jeremy.

Still a kid at heart, Jeremy has a ready smile for everyone; though he has some difficulty socializing with kids his age. He is more at ease with older kids – “as long as they love Math”, he says. So, he probably wouldn’t have much trouble fitting in with the college crowd despite his young age – and he’s already excited for the lessons to become difficult! Ooooops..