Working in another country far from home can be very lonely. Too much of this loneliness can even lead to depression. Most people who are working abroad and braving the struggles just to be able to provide for their families sometimes suffer from loneliness that results to losing themselves.

The Filipina worker was sitting on the edge of the window of a high rise window.  According to Anne, no other information about the woman is known, aside from her name which is Johann. 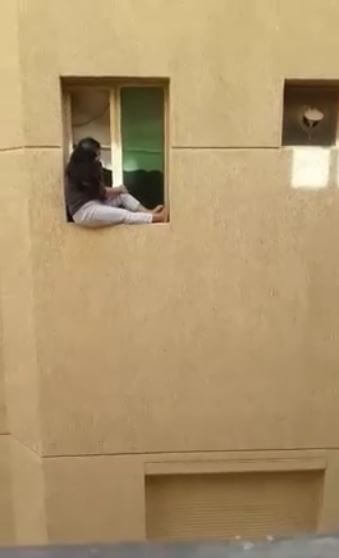 Johann has no mobile phone and no way to reach any of her family that is left in the Philippines. She has been in Kuwait for 6 months already but she really wants to go home to the Philippines.

In the video, Anne was heard asking the woman what her name is. She also pleads for the woman to hold because she might fall.

Anne was also heard telling Johann not to think about her problems in the Philippines. She told Johann to motivate herself, push herself up so she won’t feel sad.

Anne didn’t know who to call for help, so she posted the video hoping that those who will be able to see it can point the video to the respective authorized people that can help.

In an attempt to make conversation with Johann, Anne even asked her what her name is on Facebook.

Loneliness can be hard to battle especially if Johann had no other people to tell her problems to. Kudos to Anne for her quick thinking and for motivating Johann. We hope help can be brought to Johann immediately because she clearly needs it.

The video from Anne was deleted, here is a repost from RMN Iloilo.