They say that every woman needs a pedicure to complete her beauty regimen. It actually has a lot of health benefits not only because it boosts a woman’s confidence, but because it can also take away stress. However, unfortunately, a woman got a serious infection from getting a pedicure that left her unable to walk.

Stacey Wilson just wanted to have a soothing pedicure. When she went to the salon to get one, the nail salon worker got too rough on her feet with a pumice stone. It nicked the side of her foot near her pinkie toe and soon after her ankle became sore and red. Wilson then developed a high fever. Three days after her visit to the salon, she was unable to stand. She was then brought to the hospital. 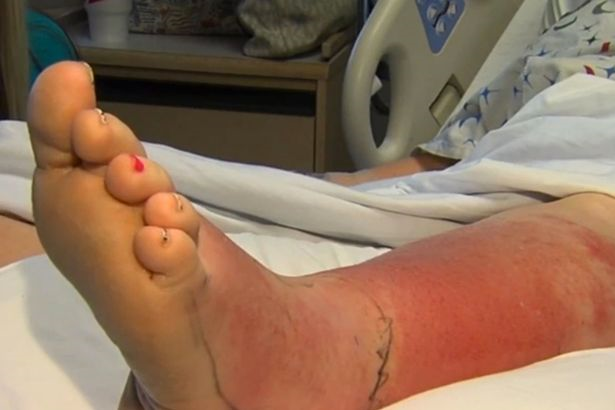 “It’s like you’re staying too close to a fire and you cannot get away, that’s how the way it feels”, Wilson says about how it feels like to have cellulitis.
Photo Credit: Mirror

It turns out that Wilson acquired an infection called cellulitis from her pedicure treatment because her cuts had become infected. Dr. Michael Pafford, her attending physician, says it is not uncommon for people who have manicure and pedicure treatments to get infection. Dr. Pafford suggests that speaking up when you think the salon doesn’t have sterilized equipment.

Recognizing you have the right to refuse them from continuing if you think they’re not using sterile equipment. That’s the best thing to do.

Wilson says she will be filing a complaint with the Health Department as soon as she gets better.

According to WebMD, cellulitis is a common infection of the skin and the soft tissues underneath. Cellulitis usually happens when bacteria gets in the skin. Some of its symptoms are redness, swelling, warmth, pain or tenderness, and leaking of yellow, clear fluid or pus. People with diabetes, circulatory problems, liver diseases and those with skin disorders are usually at risk for this type of infection. However, injuries that tear the skin, like getting a skin cut from an unsanitary pedicure, can also cause cellulitis.