Rhinos are territorial creatures – and they can be quite dangerous, especially to humans, because they can easily charge at you in full speed and try to batter you so you would be scared enough to refrain from encroaching on their territory ever again. That’s if you survive, of course.

But not all rhinos are wild and scary, it would seem. One has built a friendship with a photographer, Garth de Bruno Austin; however, you should know that it took Austin several years of trying to befriend the rhino before the animal let him come close!

Still, it was amazing to watch the two together, with the rhino even ‘asking’ Austin for a belly rub! Strange but incredible, isn’t it? 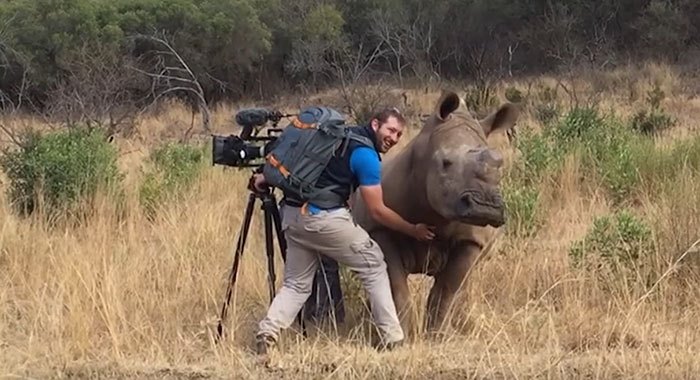 The unlikely friendship started when Austin began visiting the rhino’s home for various photography projects and because he was simply enamored by the raw beauty of the African savannah.

In his years of enjoying the beautiful creatures of South Africa, he has also become an advocate for their conservation. He strongly opposes unethical animal poaching practices, something that is quite common in the country.

To raise awareness against poaching, Austin decided to make a film about it – featuring the wild rhinos and other animals targeted for the trade, of course. It was during one of these moments that the crew took a video of a rhino rushing towards Austin, not to make him get out of its territory but only to ask for some belly rubs! Cute, isn’t it?

Yes! While rhinos are herbivores and won’t likely have interest in catching you as food, they are very territorial animals and could easily crush humans and other animals to death so it could drive them away from its home…

So, if you happen to get a chance to view a wild rhino, don’t attempt to give it belly rubs!