Home
Videos
Viral Videos
This Guy Claims He Can Read Your Mind… Is He For Real?

In a video that has since gone viral on Facebook with over 18.9 million views, a Danish father-of-three claims he can read your mind – but is he for real?

The ‘mind reader’, 42-year-old Lasse Burholt, actually had a very simple trick to show yet he claims that he can accurately predict what the viewer will choose. All he did was show them a few simple calculations they had to quickly make before asking them to pick a number between 5 and 12; he claims that the answer the viewer will pick a certain number.

First, watch this video [DO NOT SCROLL BELOW FOR THE ANSWER] so we will know if his trick works with you:

Did Lasse correctly predict the number you would pick?

Indeed, a lot of people commented that they picked that number and had no idea why they picked the number or how Lasse could have guessed that. There were some who laughed at Lasse’s claim, however, saying it was nonsense and revealing that they picked a different number.

But how does Lasse’s mind-reading trick work, anyway?

First, Lasse tells the reader to answer a series of simple equations quickly, highlighting the word “FAST” on his instruction cards.

Then, he asks the audience to quickly think a number between 5 and 12, showing the possible numbers in random order on the next card before revealing that his audience surely chose 7. 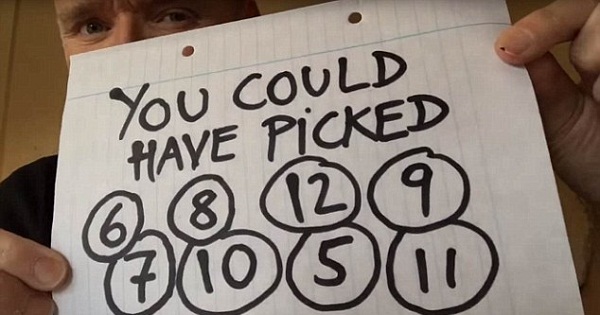 So, how did he come up with this number and why did many people (including you?) choose 7, anyway?

The answer is that the calculations he asked you to make in the first part of the video played a huge role in what number your brain will pick afterwards. If he didn’t ask those questions first, it would be much harder for him to claim that he could “read your mind”. This is called mental conditioning.

Since the first two equations were additions and the third one was subtraction, the brain automatically calculates “12 – 5” (which is essentially the fourth equation) when asked to choose a number between 5 and 12.

What do you think of his trick? Did he predict your number correctly?