Dogs are fun-loving creatures who can find joy in toys that humans don’t even consider as toys or something that could bring them fun – such as a pair of rubber slippers or new shoes, perhaps?

But it is even funnier to see dogs playing with toys and equipment that are meant for humans!

Proof of this is a video of a Great Dane that has recently gone viral.

According to Jeff Davis, he was at the yard one day when he heard strange noises coming from his neighbor’s yard. Thinking that he might catch a raccoon or some other creature or even prowler there, he decided to take his camera so he could record evidence.

At first, Jeff didn’t really see anything although he could hear the neighbor’s Great Dane barking. Perhaps the dog was able to catch the prowler?

Well, it turned out there was no prowler but the neighbor’s Great Dane had discovered the joys of playing on the trampoline! It seemed that the dog was really enjoying his time on the play thing as it was not barking nervously but actually sounded like it was having the time of its life!

Jeff couldn’t help but laugh at the dog’s antics; although he expressed concern that the dog might hurt itself if it made a bad landing on the ground. 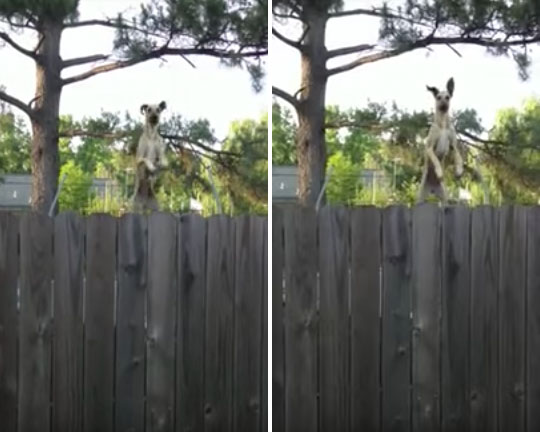 While the clip itself was just a short one at just 25 seconds, a lot of people loved it so much that the video has since received close to 1.27 million views on YouTube!

Check out this adorable Great Dane and its fun moments on the trampoline:

What is a Trampoline?

A trampoline is a strong fabric sheet connected to a sturdy frame using springs, allowing the user to jump higher. While it is used as springboard and landing area in gymnastic exercises and some sports, it has gained popularity as a children’s toy.