Mark Aulger from Texas, USA already had four kids with wife Diane Aulger when he was diagnosed with cancer. But they received good news: Diane is pregnant with their fifth baby, a girl. Ecstatic over the good news, Mark was determined to get well and meet his new baby.

He had completed eight months of chemotherapy in December and they received another good news from the doctors: he is completely free of cancer! It was the best news the family could ever receive for Christmas.

The family celebrated a great Christmas season as they enjoyed Mark’s triumph over cancer and the coming baby who was due in January. 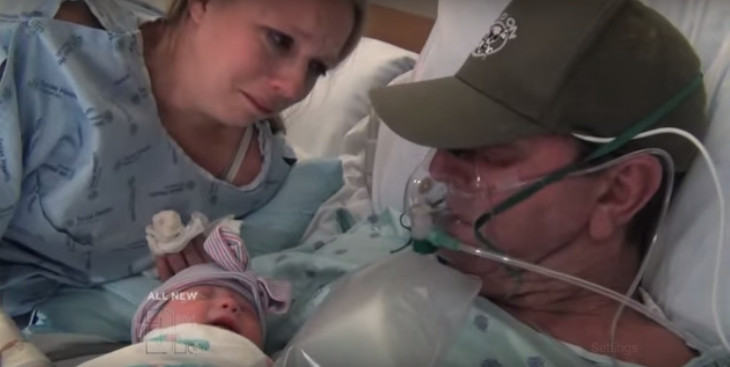 But after celebrating what they felt was the best Christmas they ever had, the family was distraught when Mark collapsed after having fun on New Year’s Day. They rushed him to the hospital where he was diagnosed with late stage pulmonary fibrosis, a lung disease.

While the doctors were positive that the cancer has not returned, they had to admit to the family that the chemotherapy had damaged his lungs and had led to the pulmonary fibrosis.

What’s even more heartbreaking is that they were told that Mark only had about 1 week to live – and there was very slim chance that he would live long enough to witness his daughter’s birth and see her in person.

But Mark wasn’t content with just seeing the baby from the ultrasound photos. He wished to see her but the doctors were quite sure he really wouldn’t make it.

So, Diane made the decision to undergo C-section to give birth to the child two weeks before the due date so Mark could meet her. The C-section was done on January 18 and they named the child Savannah.

Mark was the first to hold Savannah. Despite being weak, he cradled her for 45 minutes. It was a heartbreaking moment. He got a chance to hold her again the following day but it was only for a minute. He slipped into a coma thereafter. Sadly, he died 2 days later and never got the chance to hold his new daughter and the rest of his family again…