Monkeys are similar to humans in so many ways – and it seems that they are good at mimicking what humans do as well.

Take for example this monkey who was videotaped actually washing some basins at the river. Shared by NTD Television, this clip shows a monkey, possibly a female, with a baby on its back. The older one was holding what appears to be a brush which it used to scrub the basins that were chained to the rocks on that river.

The uploaded did not mention where these monkeys can be found and whether they were trained to do this but it was clear that the monkey knew what it was doing. 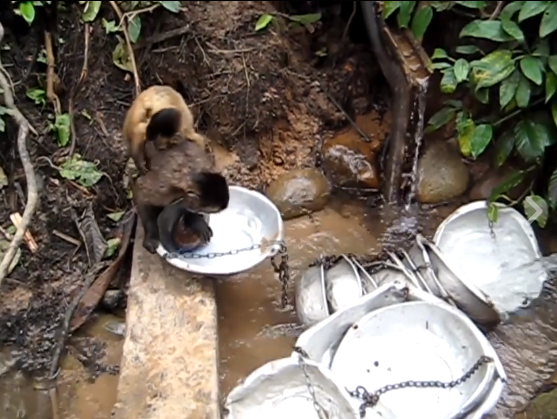 Perhaps the task was a regular one and was created for the monkey to have fun – for why else would they chain those basins to the rocks, anyway? Of course, the other possibility is that the basins were regularly used (possibly for feeding the other animals in that place) and that the monkeys were trained to clean these up afterwards.

As for the chains on the basins, it is also possible that those were placed so the basins wouldn’t be carried too far downstream. Without further information from the uploader, we could only speculate about things but what’s for sure is that this monkey knows how to wash these basins like a pro!

Notice how it scrubs the basins well.

Some netizens joked that they wish to adopt the monkey so they don’t have to do their dishes at home; although others pointed out that they can easily train their own ‘monkeys’ at home (aka children) to do the job. LOL.