Fisherman Mark Watkins was out fishing some 30 miles from Bunbury, Australia when he noticed a huge orb floating at the distance. The orb looked like nothing he had seen before – and, naturally, he was quite curious as to what it was.

He took some snapshots and shared it on the web – thankfully, he wasn’t curious enough to poke the orb and start investigating it by himself because had he done so, he would surely regret it for the rest of his life. For after Watkins shared the photo, it was quickly identified by marine biologists as whale carcass!

The alien-like orb is actually the decomposing body of a whale; though it was difficult to determine at this point what species of whale it was but the Mother Nature Network believes this was either a humpback or a southern right whale. 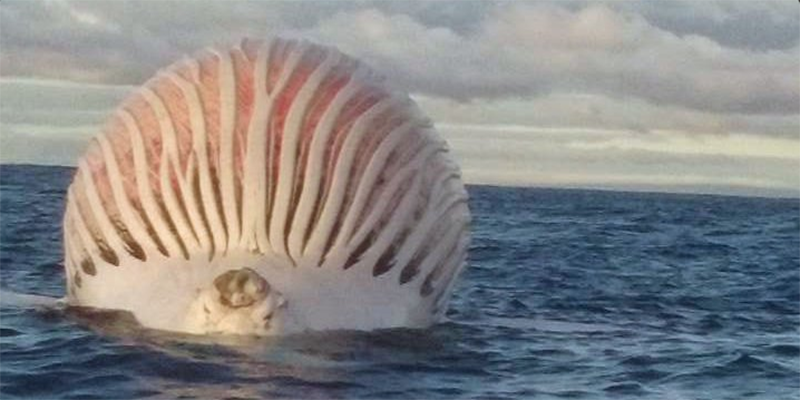 According to marine biologist Andrew David Thaler, the bloated appearance of the “orb” was due to gases that become trapped inside the body of the dead whale. He also revealed that dead whale is one of the worst and most pungent smells in the world – and it was a good thing Watkins did not poke it because it could have exploded.

Not only will it emit very pungent gases into the area, it would naturally spew decomposing whale parts – and that’s something no one really wants to deal with! Thankfully, all Watkins did was take a picture.

So, what happens to this massive orb? According to Thaler, if left untouched, this bloated carcass will eventually collapse unto its own and sink to the bottom of the sea. This will then become a treasure trove of resources for the aquatic community, especially because the huge carcass takes up to 30 years to breakdown.

What is a Carcass?

Carcass is the term used for the dead body of an animal.