Although it is not often that sharks go to shallow parts of the ocean, there have been many cases when the hunt brings them to shallow waters. When this happens, they could pose danger to many people.

How many shark attack news reports have we heard over the past years? Not too many, really, but these still matter because not too many people can survive a shark attack or know how to handle one. Even the most experienced and strong swimmers can be defenseless against a shark attack. 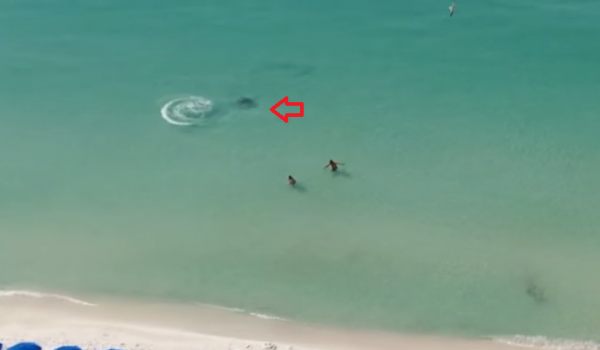 Thus, when some people saw a shark circling the waters just a few meters away from two tourists swimming in the shallow waters, they were horrified, of course! It appears that the shark had a target but might change its mind and attack the people, instead.

What was even more horrifying is that these tourists were not even aware of the mortal danger they were in until after a few seconds into the clip.

There are around 480 shark species across the world, most of which have lived in peace in the oceans and seas. However, three species have become notorious because of several incidents of unprovoked attacks on humans. These are the bull, the tiger, and the great white. You’ll never want to encounter these sharks in the water – shallow or deep!

Shark attacks could be preventable, as could be seen in the video above but there are times when the swimmers just weren’t lucky enough.

Of the 2,899 total shark attacks reported across the world from 1580 to February 2015, 548 had been fatal. Majority of these attacks happened in the US!

However, it is worthy of note that most of the fatal attacks happened in Australia. Based on the same data shared on Wikipedia, out of the 1104 shark attacks in the continental USA, only 35 were fatal while out of the 654 attacks in Australia, 184 were fatal.

So, the next time you are out swimming, especially in areas where sharks have been sighted, always stay alert. Stay safe and have fun!