The first electrically augmented plant has been developed by scientists at the Linköping University in Sweden.

By incorporating analog and digital circuits inside a rose’s natural system of vessels as well as its leaves, scientists can now regulate growth and chemical processes in plants. In the future, this technology can help them harness photosynthesis to make new solar cells. 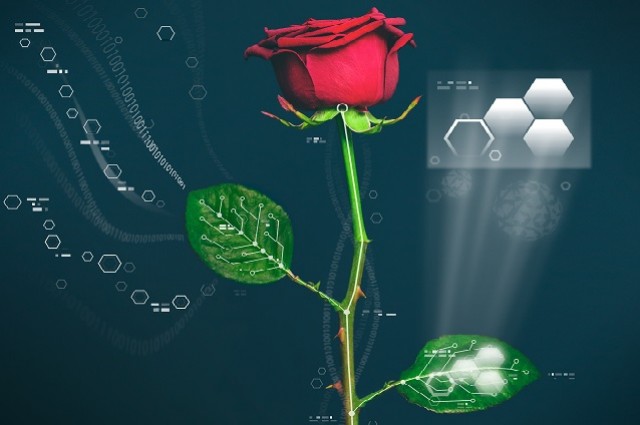 Using a special semi-conductive polymer called PEDOT-S that was able to act as a wire and transport water and essential nutrients through the rose, the scientists were able to create the cyber plant. PEDOT-S was the only synthesized substance which successfully assembled itself inside the plant’s xylem channels.

Without limiting the plant’s ability to carry water and nutrients, the wires were able to spread evenly through the plant and form conductive structure which are up to 10 centimeters long.

The scientists then created simple transistors that switches current through the wires. They also used vacuum infiltration to put another polymer in the leaf that creates basic display with pixels. This allowed the leaf to change its color into different shades of green.

“Now we can really start talking about ‘power plants’ — we can place sensors in plants and use the energy formed in the chlorophyll, produce green antennas or produce new materials,”  said Professor Magnus Berggren.

The US Food and Drug Administration has issued new rules about labelling of genetically engineered plants approved for the food market.

According to the agency, they are not aware of any valid scientific evidence that shows food derived from genetically engineered plants significantly differ from other foods.

The FDA added that if the food derived from genetically engineered plant is materially different from its traditional counterpart, then the differences must be indicated in the label.