In an attempt to promote eco-friendly means of public transportation, the city government of Makati has teamed up with a Japanese company to deploy about 200 electric tricycles in the city.

Kazumasa Nakasihima, vice president of Global Mobility Service (GMS) Philippines Inc, said that their company has signed a memorandum of understanding with city officials as well as the Tricycle Operator Driver Associations (TODA) in the city.

As a result, they will soon be introducing 4-stroke tricycles and electric tricycles that utilize the company’s unique Mobility Cloud-Connection System (MCCS). The tricycles come equipped with global positioning system (GPS) and are well-protected against theft. 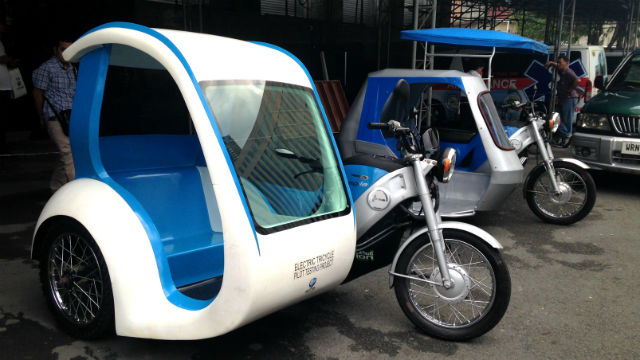 These e-trikes are intended to replace the city’s environmentally hazardous tricycles currently in use in Makati. Perhaps best of all, tricycle drivers will be able to have their own e-trikes for the affordable cost of Php160 (roughly US$4) per day for 3 years.

Tricycles In The Philippines

Motorized tricycles are a common means of public transportation in the country.

In 2012, it has been reported that there are over 658,675 for-hire tricycles in operation in the Philippines. That figure makes up about 68% of the total for-hire vehicles, meaning there are more tricycles than taxis, buses, jeepneys, and other public utility vehicles.

Depending on their design, a passenger tricycle can carry from 4 to 9 passengers. Tricycles, pretty much like jeepneys, are painted colorfully.

Although undoubtedly considered by many as a cultural icon in the Philippines, tricycles are often criticized for becoming sources of pollution. A 2014 report by the Ateneo De Manila University claims that tricycles and motorcycles cause around 45% of volatile organic compound (VOC) emissions.

Indeed, the introduction of the electronic tricycles can be a breath of fresh air for both the drivers as well as the commuters. We hope more cities and municipalities will eventually follow suit.