More often than not, moms are the ones who attend their children’s activities in school and get them ready for their presentations but there are times when the dads do it. Of course, that’s perfectly alright – in fact, that would be awesome!

But one dad recently went viral for his adorable dance moves during his daughter’s presentation in school. Many of the parents in the school were so amused by his performance that one took a video that has since gone viral on Facebook. 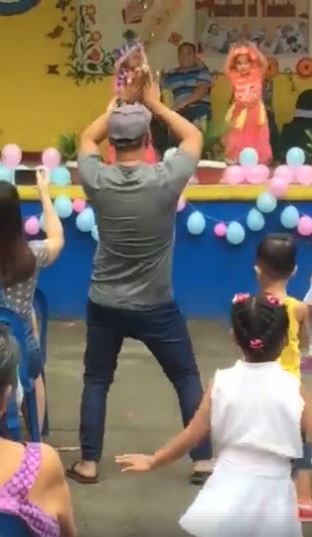 Cristina Santos Antinero posted the video on Facebook, praising this unnamed dad for being such a supportive one to his daughter.

He wasn’t upstaging his daughter but was actually acting as her guide while she danced on stage. A lot of moms have done the same thing, and teachers often do it especially in younger children’s presentations but it still made us smile to see this father do it.

Two kids were dancing a hula dance on stage, wearing grass skirts and flowers like little Hawaiian ladies. They were so cute to watch as they presented in the Festival of Talents.

It was easily obvious that this father was the one who taught them the dance moves because he knew all the actions and demonstrated it to make sure the kids will follow him. 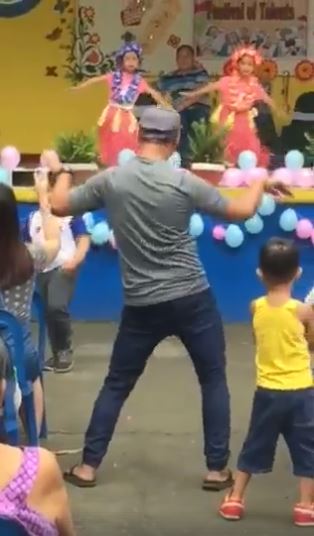 Many netizens expressed their happiness over this video, saying they admired this dad and knew he would be there for his kid every step she takes in the future. We’re actually hoping her daughter would join some big time event when she grows up – and still see him there, dancing with enthusiasm.

What can you say about this dad?

What is a Hula Dance?

The hula dance originated from the Hawaiian Islands by the Polynesians who had originally settled there. The ancient style used chant and traditional instrument but the modern version now use Western-inspired instruments and music.