While it is believed that the detractors of Philippine President Rodrigo Duterte are well-funded by rich business and Liberal Party (LP) members who allegedly pay people to attend their rallies and functions against the president, the pro-Duterte camp is not that moneyed.

But according to the organizers of the “Protect Duterte Rally” this coming April 2, 2017, funds are being raised to help protect the president from those who are trying to unseat him so they could continue with their personal agendas.

The rally will be held on April 2, 2017 at Luneta Park from 4PM to midnight but the group has already raised quite a good amount for the cause. 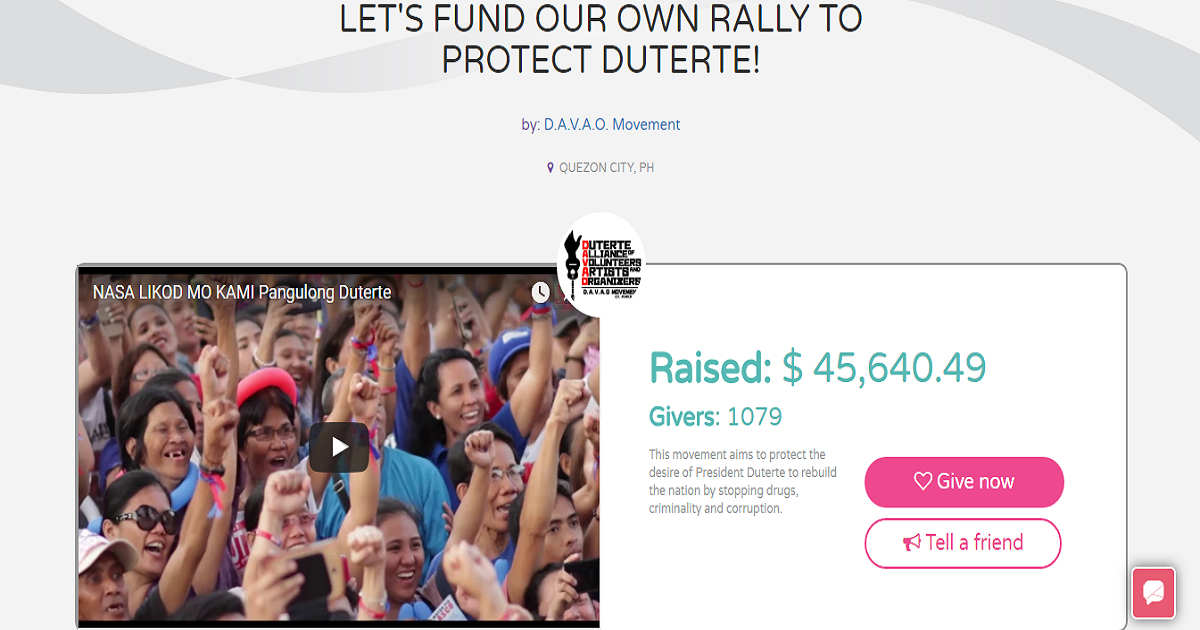 In fact, as of March 26, the Protect Duterte campaign has raised $45,640 (around Php2.3 million) from over 1,000 donors on crowdfunding site Gava Gives! Isn’t that amazing?

This rally was organized by D.A.V.A.O. Movement (Duterte Alliance of Volunteers Artists and Organizers). The main aim is for people to show their support to the president and to call for detractors to stop shaming him.

According to D.A.V.A.O. Movement, all donations should be coursed through the crowdfunding campaign to ensure transparency. It was also revealed that the donations will be processed by Jimmy Bondoc but everyone will be able to track where their money goes.

So, why are the rally organizers asking for donations? Just to be clear, D.A.V.A.O. Movement explained that the organizers themselves won’t be pocketing any of the cash and won’t be paid a single cent for anything they will do for the rally; however, other incidentals must be taken into consideration and paid for – including the rally venue, security, and others.

But because they want to ensure that the money to fund the rally won’t come from shady deals with corrupt officials of government, then they launched the Gava Gives campaign.

Amazingly, the donation continues to rise and is expected to possibly double (or even triple?) by the time the rally date arrives!

To donate or simply check out the campaign, click here.