At the start of the new school year, parents at Catholic High School for Boys in Little Rock, Arkansas received a letter from Steve Straessle, the school principal. The said letter reminded them about the school’s long-standing policy against bringing forgotten homework, lunches, or sports equipment for their sons.

Later on, the school posted a photo of the rule on their Facebook page and it started to draw greater attention.

In an interview with Today, Straessle explained:

“Teenage boys will often hit the default switch of calling parents to swoop in and fix problems they encounter. We encourage our boys to fight that inclination and, instead, think how they can solve a problem on their own.” 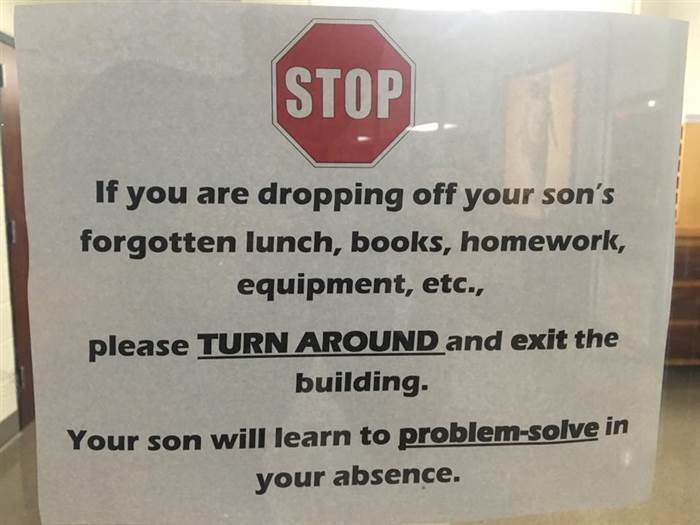 The principal, also a parent of five children himself, believes that the guideline serves to teach the importance of what he labels as ‘soft failures.’

“‘Soft failures’ are the times when a boy comes up short. It’s when he forgets his lunch, doesn’t make the team, or faces some sort of consequence for behavior that is beneath his character. Soft failures are learning experiences that are the foundation of becoming an adult. Soft failures have never ruined a life. The lack of soft failures has ruined many lives.”

Jessica Lahey, educator and author of “The Gift of Failure: How the Best Parents Learn to Let Go So Their Children Can Succeed,” said:

“The argument against policies like these — that children can’t be expected to remember everything all the time, and we should not punish them for such lapses — misses the point.

“Childhood is a continual, long-term process of learning how to make our way in the world, and parents who short-circuit that education by rescuing their kids are not doing them any favors.”

How To Guide Teens to Independence and Self-Reliance?

“Adolescence is where parents reap what they have sown during the earlier years,” says Katie McCorkle, Ph.D., family and child psychologist in a More4Kids article.

According to McCorkle, it is important to “allow room to make mistakes” and simply “learn from them.”

“We often learn more from our mistakes than from our successes, because we tend to pay more attention to them and to their consequences. Offer teens a “safe” realm of authority in their own lives, so they can learn. One way my mother taught me to manage money was to add up what she spent on me for certain things (clothes, entertainment, travel, toiletries, etc.) for a year, divide it by 12, and give me a monthly allowance in that amount. I LOVED this, because it gave me room to change the priorities (spend more on entertainment and less on clothes, etc.)”