The internet has been abuzz these past few days regarding the #LeniLeaks issue wherein the Office of the Vice President (OVP) as well as a number of prominent Liberal Party (LP) members and supporters were discovered to have been allegedly ‘plotting’ the ouster of Pres. Rodrigo Duterte.

So, when ‘Saint Cory’ shirts appeared in Seafood City, Chicago, USA, a number of netizens couldn’t help but wonder whether this was another part of the ‘grand plan’ to drum up support for Vice President Leni Robredo and former President Benigno “Noynoy” Aquino III.

After all, everyone knows that Noynoy is the son of the late Corazon Aquino, also a former president who is now being touted, supposedly, as ‘Saint Cory, the Saint of Democracy’. 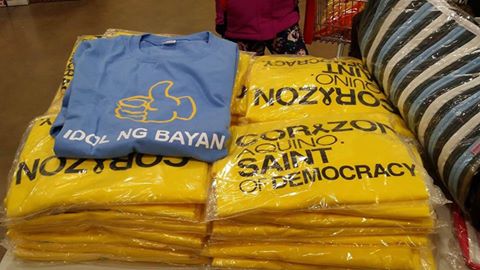 While Cory has not been officially declared as the Saint of Democracy, many of her supporters believe she deserves the honor, especially because she had been the face of the peaceful but effective People Power Revolution which ousted a dictator, the late Pres. Ferdinand Marcos.

But that’s easier said than done because becoming a saint is not just something that people can do on a whim for someone they like, no matter how popular he or she might be – so, the chances of Cory ever becoming a real saint are actually quite slim!

Some netizens believe that despite not being a real saint, however, seeing Cory’s name accompanied with the tagline ‘Saint of Democracy’ could actually set the tone and the mood in the minds and hearts of the people – so much that they just might eventually believe this was true. Or at the very least, it can bring back nostalgia in people and make them want to join rallies against perceived oppression so they can find freedom from the supposed ‘Marcos-like’ administration of Pres. Duterte.

Whatever the reason might be behind the ‘Saint Cory’ shirts, a lot of netizens think that these were not appropriate and should not be sold at all…