Everyone knows that it is not easy to receive medals because competition is often tough and there are lots of others who are also working their best to reach the goal and receive the coveted medal as prize – but one student in the Philippines has made it appear that medals are easy to get, for he graduated with a total of fifty eight!

At 12 years old, Joshua Santiago graduated from Elementary at the Mabiga Mabalacat Elementary School in Mabalacat Pampanga just like everyone else his age yet the boy has stood out from the rest of the graduates in that he had 58 medals around his neck that day.

In a post on Facebook, Santiago shared a video of the moment he received his medals – and his proud mom and amazed teachers couldn’t help but smile over his awesome achievement. 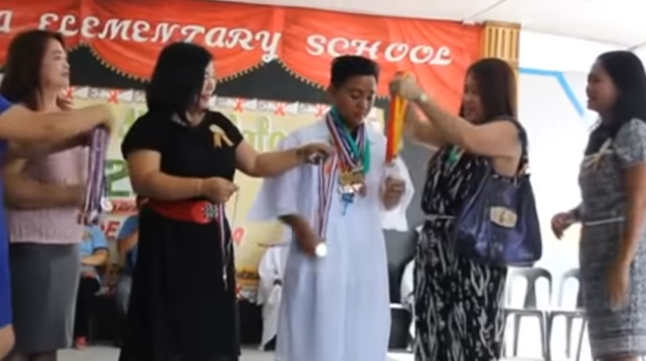 He did not elaborate on how many medals he received last year or for what awards did he receive his current medals for but netizens were so amazed over his feat that the post has received over 1.6 million views since he posted it on the first week of April.

While many netizens congratulated the boy on his achievement, others joked about how he was just asked by his classmates to receive all the medals so they wouldn’t have to stand up on stage.

With so many questions surrounding the post, his mother eventually provided an explanation. According to Santiago’s mother, the boy received those many medals because these were actually the tally of all the medals he received for one year.

As Athlete of the Year and in recognition of his achievements, the school decided that all these medals should be showcased on his graduation day; thus, they were unusually plenty.

Still, we are quite amazed that this boy received all those medals in one year, right?