MANILA, Philippines – To serve as inspiration for him to work his route, a jeepney driver posted the graduation photos of his daughters on top of the coin holder in his vehicle.

According to Justin Giovanni Ilagan Linatoc who shared the snapshot on Facebook, he had first encountered the jeepney driver some 3 years ago and he posted the photo of the inspiring coin holder then. Recently, he remembered the snapshot and shared it again on Facebook.

While there were those who commented that this jeepney driver, whoever he is, should already retire and let his children support him now that they are all graduates and surely working in good jobs, it seems that this hardworking dad continues to drive his jeep.

Possibly, he’s not aiming to support his kids now that they appear to be in better places but he could actually be enjoying his job as jeepney driver and doing it pass time – just like many other old people who would rather continue working than retire and do nothing at home. 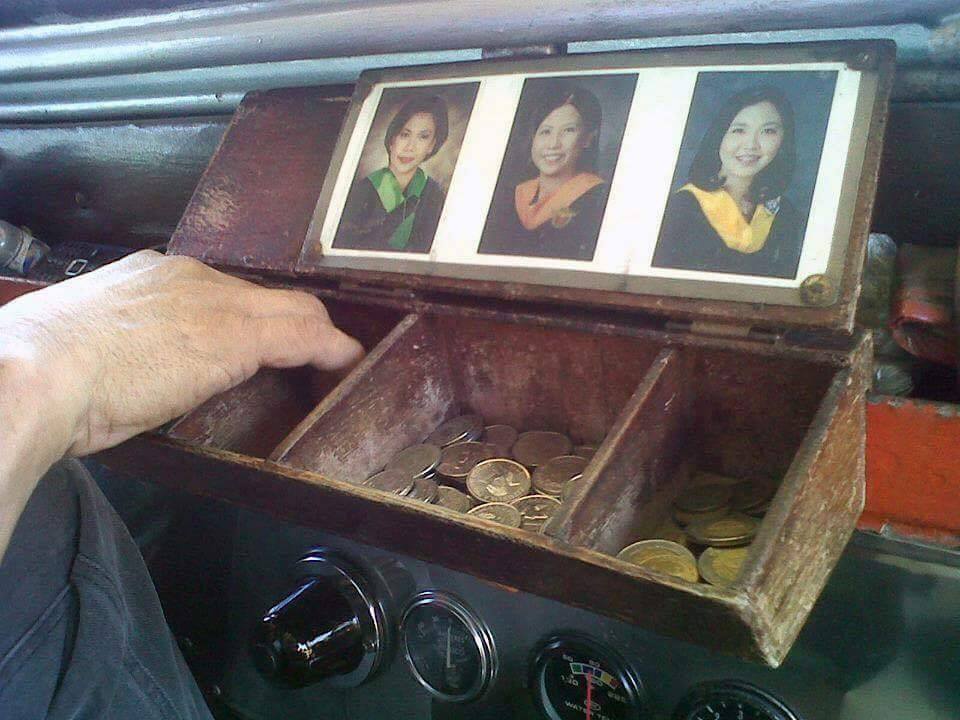 One of those who commented on Linatoc’s post which he shared on “Narinig ko sa UP (Overheard at UP)” Facebook group commented that she had also sat at the front seat of the said jeep and had seen those exact photos – except that the space on the left is now taken by a sweet young boy.

Could this young lad be the jeepney driver’s first grandkid? It would certainly seem so!

While we really do not know the full story of this jeepney driver and his inspirations, it is wonderful to know that this dad is very proud of his kids and, more importantly, he was able to send them to college with his ‘meager’ job as jeepney driver!

Congratulations to you all!

Jeepneys in the Philippines

The jeepney is an iconic form of transportation in the Philippines. This modified vehicle features front row seats that face the traffic just like all other vehicles but the long back seats do not face the front but each other, allowing for more passengers to sit inside the jeepney even if it only has one entrance/exit point at the backside, often left open and without a door.

Jeepneys are a common method of transportation not just in Metro Manila but even in the provinces and islands across the country.