The jeepney (or simply “jeep”) is the iconic mode of transportation in the Philippines. You’ll see these public utility vehicles not just in the streets of Manila but in many parts of the country as well – whether urban or rural.

The jeepney is so popular that, in many rural areas, it is the primary form of transportation.

The many cities of the world have their own forms of transport but for the first time, the Philippine sarao jeepney has reached and cruised the streets of New York City, USA, just in time for Independence Parade!

Every year, Filipinos in New York City commemorate the Philippines’ Independence Day with a parade which ends at Madison Square Garden where a program and party is held.

This year, Filipino American rapper and record producer apl.de.ap (real name Alan Pineda Lindo) decided to push the celebration up a notch by bringing the iconic jeepney to one of the world’s powerhouse cities. 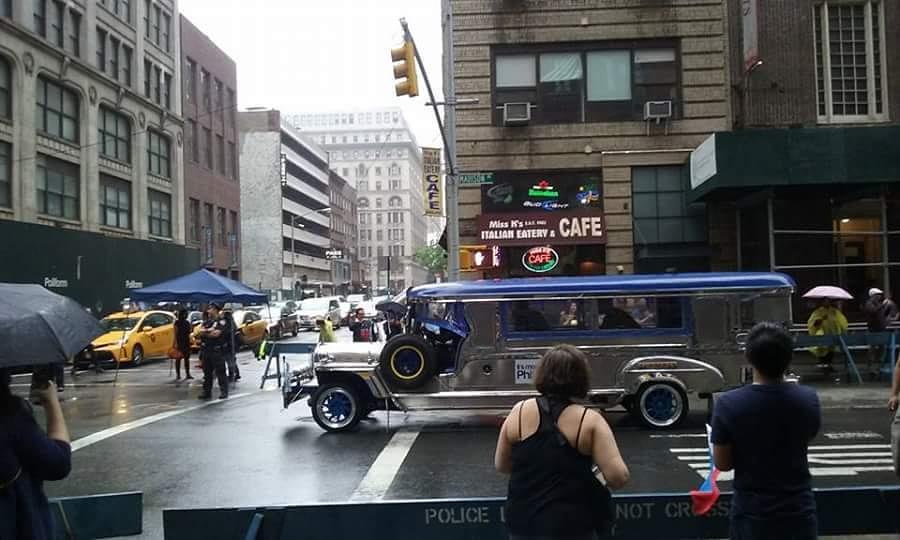 Taking the jeepney to New York City also meant bringing the “It’s More Fun in the Philippines” tourism campaign; thus, apl.de.ap. collaborated with the Tourism Promotions Board who handles the campaign. The project led to the creation of the beautiful blue and yellow jeepney which became a viral hit minutes after it graced the parade.

Aside from apl.de.ap posting photos of the iconic sarao on his Instagram page, many Filipinos (and even foreigners!) also shared photos and selfies with the jeep for it really is quite rare to see a jeepney outside the Philippines!

For the Filipinos in New York who celebrated the Independence Day parade, seeing the jeepney and getting to touch or ride it brought back memories of home.

Even if the parade was met with rain, a lot of Filipinos braved the downpour to celebrate the occasion.