A maid who only wanted to have a better life by getting a job in the Middle East to support her family ended up jobless and with one less kidney – and she didn’t even know it was stolen from her!

Sri Rabitah of Lombok, Indonesia applied at a job agency in her locality for a job in the Middle East. She was assigned to an employer in Abu Dhabi but was brought to a Palestinian family in Doha, Qatar. As she was looking for a job, anyway, Rabitah did not complain and readily went with her new employers.

But the new employers were skeptical that her medical requirements were for real, they claimed; thus, they brought her to a doctor they knew for a check-up so they could be certain she does not have communicable diseases.

The doctor told her new employers that Rabitah looks unwell and has to take some injections which they readily agreed to pay for. But after the injections, Rabitah felt week; so, the doctor asked her to lie on the bed. 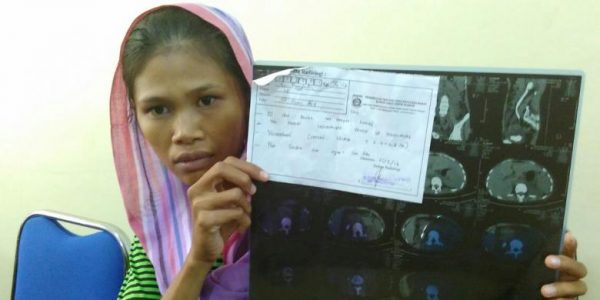 That was the last thing she could remember about the clinic visit. She woke up to a sharp pain and a small wound on her lower back but because her employers couldn’t explain what happened, Rabitah just didn’t know what to do.

She continued to feel pain in the coming days and was shocked to see blood in her urine but her employers did not bring her to the hospital. Instead, they took her back to the agency some weeks later to complain that she was “too sickly” and that she does not work well.

The agency placed her with another employer but because she was often sick, she was returned again. This happened a couple of times and the agency soon got angry at Rabitah; so, they sent her back home.

Back in Indonesia, Rabitah continued to feel pain on her lower back. After seeing a doctor, she was informed that the cause of her chronic lower back pain turned out to be a coiled tube placed at where her right kidney should be!

Since it had been 3 years after Rabitah left her employer, she isn’t sure whether she could still sue them but hopes the Indonesian government will look into her case and help her make those Palestinian employers pay for what they did!