Almost everyone had been sympathetic of Mary Jane Veloso’s plight, hoping and praying that the Indonesians would not execute her via firing squad. Her family begged hard for her life, activist groups did protest vigils, media groups focused on the issue, and the president made a last minute appeal to Indonesian President Jokowi Widodo to make Mary Jane a witness against the drug syndicates, instead of executing her.

It seemed to the world that Widodo would never change his mind yet he did!

Mary Jane was clearly spared from the firing squad because of the efforts from various sectors and the government yet her family is now angry at the president for supposedly taking credit for the temporary respite.

Celia Veloso launched an angry tirade against Pres. Benigno “PNoy” Aquino III, saying was not responsible for changing Widodo’s mind. It was not the president but the church, the media, and various activist groups who convinced Widodo to spare Mary Jane, claimed Celia.

Netizens are now angry, saying the Velosos are ungrateful for what the government has done for them. Many of those who sympathized with Mary Jane’s plight changed their minds. Many believed the family was brainwashed by the communist/activist groups but should have simply said “thank you” for everyone’s efforts – especially to the president.

No one said it was merely the president who influenced Widodo to change his mind. The Indonesian president never gave a statement saying who was responsible but it surely was a collective effort that was bolstered by the president’s appeal. 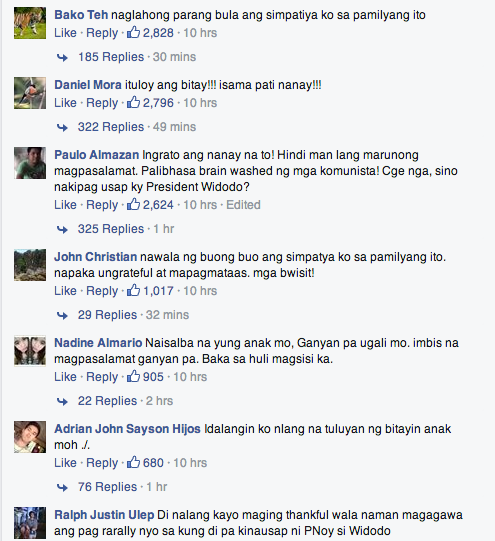 A lot of the sympathizers were angry at Celia’s tirade, pointing out how other governments also appealed for Widodo to spare their citizens from the firing squad yet those fell on deaf ears. So, there must have been something that compelled Widodo to spare Mary Jane when the others had been executed! Perhaps it helped that PNoy suggested about using Mary Jane as witness to catch the bigger fish.

Netizens also pointed out that the Veloso family should not be antagonizing the government, especially because Mary Jane’s reprieve was just temporary – Widodo could still change his mind and go ahead with the execution, especially because there is also pressure from other Indonesian officials for their president to uphold the law!

PNoy: I did not create your problem!

The president defended himself and the government, saying they did what they could do. He also enumerated government efforts, including providing legal counsel for Mary Jane and the various appeals to Widodo done not just by him but other top Philippine officials as well. It was also the government who brought the Velosos to Indonesia.

We did what we could‎. We were not involved in the creation of the problem. You must remember she was arrested, if I am not mistaken, April of 2010. What more can the government do? – President Benigno Aquino III

Despite Celia’s tirade, PNoy promised that the government will continue its efforts to keep Mary Jane from being executed.