Filipinos can really excel in anything when they put their minds and hearts into it. Here’s another proof of the world-class talent and skill exhibited by a talent by the name of Verniece Enciso.

Verniece is a figure skater who took home not one but four gold medals from the recently-concluded Skate Bandung 2015 held at the Gardenice Rink in Bandung, Indonesia. Along with the gold medals, she also won two silvers and the Best Performance Award, further exhibiting and cementing the expertise of Filipinos in the sport. She bested out figure skaters from China, Indonesia, Thailand, and other countries.

Vernience later took it to Twitter to announce her victory: 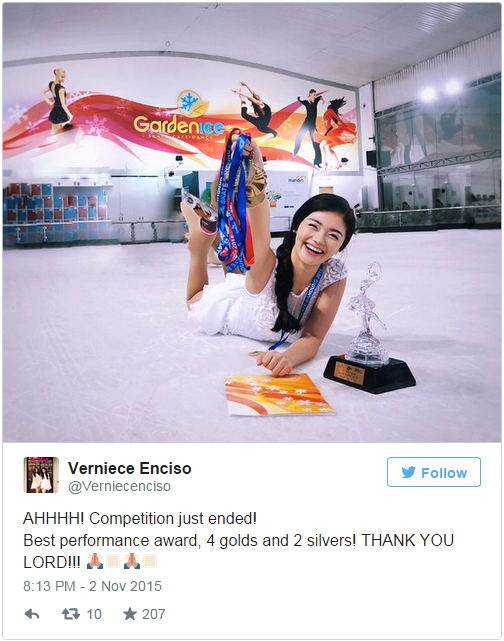 Aside from figure skating, Verniece is also an active blogger who often writes about fashion, travel, food, and everything else. You can follow her blog over at VernVerniece.

Although obviously foreign in origin, figure skating is a sport that has become popular among Filipinos with SM Skating rink as the main hub for its enthusiasts. SM Skating has three branches in the country so far namely SM South Mall, SM Mall of Asia, and SM Megamall.

In 2014, Michael Christian Martinez also made headlines for being the first Filipino figure skater from Southeast Asia to compete in the Winter Olympics. He won the Triglav Trophy champion twice as well as a medal at the ISU Challenger Series. Additionally, he took home a silver medal at the 2014 Warsaw Cup.

The six Filipina figure skaters won the medals, besting representatives from other Asian countries participating in the competition.