It is every human being’s instinct to save one’s self from imminent danger – and later get wrongfully judged over their reactions to a certain situation, even if he/she did it because of self-preservation.

Take for example this viral footage of a couple who were enjoying a day at a tourist spot, jumping off the rocky cliff to the rocks below. While many were soon envious of the fun they were having, there came a moment when the girl began falling off the cliff but the guy’s reaction had the internet in furor.

Taking a closer look at the video, it was soon clear that the girl was getting ready to jump when she hesitated at the last second. Her hesitation caused her to trip. 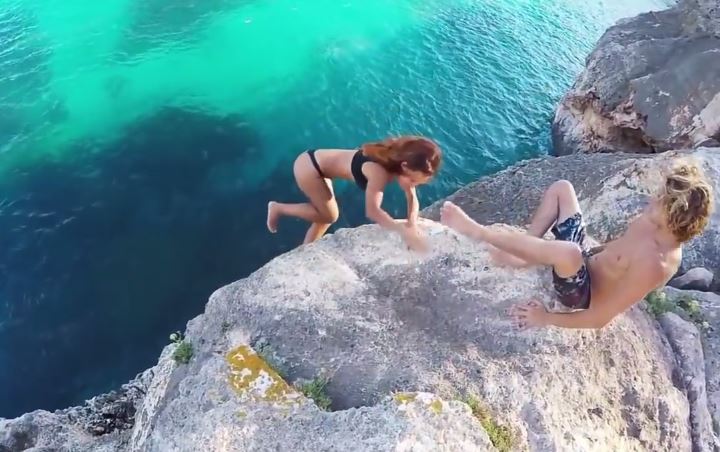 As she began falling off the cliff, instinct told her to try and grab her boyfriend’s foot to steady herself but the guy also instinctively pulled away to safety! And the girl fell to the water below. Oooooops.

As with many viral videos on the internet, everyone had something to say about it. Many were quite angry at the guy for not saving his girl! “Chivalry is dead!” many exclaimed.

But there were also a lot who took the guy’s side, commenting that the guy did the right thing. After all, if he didn’t pull away, the girl would have slammed on the rocks on her way down. The momentum would have pulled him down and he, too, could fall off the cliff.

As seen in the video, the girl managed to avoid the rocks and was able to reach the water safely. Whew! Let’s just hope she didn’t break up with him after this…

Canyoneering is the sport of exploring a canyon. It is often combined with activities like waterfall jumping and rafting.