Home
News
News & Culture
NEDA: Family of 4 Should Have a Monthly Income of P120K to Live a “Simple, Comfortable Life”

MANILA, Philippines-A survey conducted by the National Economic and Development Authority (NEDA) revealed that a Filipino household of 4 should have a gross monthly income of P120, 000 at 2015 prices in order to afford things that they believe can make life more comfortable for families. The survey titled Ambisyon Naten 2014 aims to determine the medium-term and short-term aspirations of Filipinos in terms of standard of living, finances, security and ease of transacting with the government within a generation’s time.

According to outgoing NEDA Director-General Emmanuel Esguerra, 79.2% of Filipinos want a simple, comfortable life, while 16.9% aspire affluent life. Meanwhile, the remaining aspire the life of the rich. 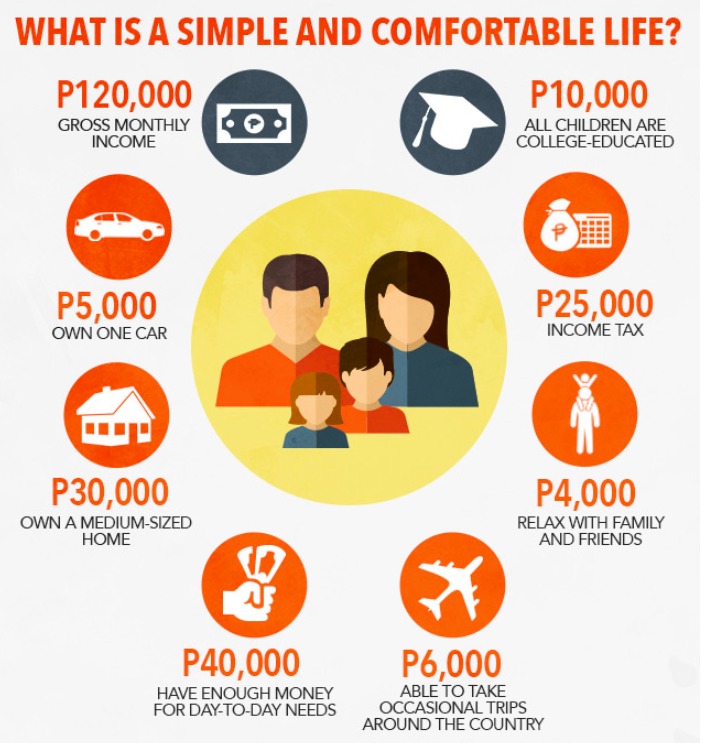 Based on the results of the survey, a “simple, comfortable life” means having enough money to finance day-to-day needs, own one car, own a medium-sized home, be able to send two children to college, take occasional trips around the country, relax with family or friends as well as pay taxes.

Initiated in 2015 and completed in February 2016, the survey used face-to-face interviews with 10,000 persons from all economic classes. The respondents, aged 15 to 50 years old, came from both rural and urban areas except in high-risk locations like Abra, Basilan and Sulu. People from provinces with small population like Apayao, Batanes, Siquijor, Camiguin and Dinagat Islands were also excluded in the survey.

“This is not meant to be prescriptive. This is just saying where Filipinos want to go, and the trade-offs. This is a vision,” said Esguerra.

NEDA Deputy Director-General Rosemarie Edillon believes that it will be easier for Filipinos to achieve this as long as the economy grows.

What is the Minimum Wage in the Philippines

According to the National Wages and Productivity Commission, effective June 2, 2016, the minimum wage in Metro Manila will be P491.