A Filipina transgender woman studying at Universiteit Leiden / Leiden University in The Netherlands wrote an open letter to those who are angry and shedding tears over the 530 alleged victims of extra judicial killings in the Philippines – and the post has gone viral, gaining over 6.3k shares and 6.6k likes on Facebook.

Are you crying for the Philippines’ 600,000 druggies or for the 530 killed in extra judicial killings? Whose side are you on?

Apparently, Sass Rogando Sasot takes the side of those angry that there are at least 600,000 drug users and pushers in the country – certainly a huge number compared with the 530 alleged victims of summary killings due to Pres. Rodrigo Duterte’s fight against drugs.

In her post, Sasot lamented how there are so many people who were more concerned with the 530 victims of extra judicial killings even when these so-called “victims” have been identified to be connected with drugs; whereas there are millions of people who are at risk from these drug addicts.

Certainly, there had been plenty of those robbed, even raped and killed by suspected drug addicts across the country – but they remain as mere statistics because most of their killers are still at large or have never been identified.

The whole country is not crying for these victims, the real victims of the bad effects of drugs yet now that Duterte has waged war against drugs, thousands of people are angry because he’s taken the law in his own hands and killing those involved in drugs.

So, whose side are you on? 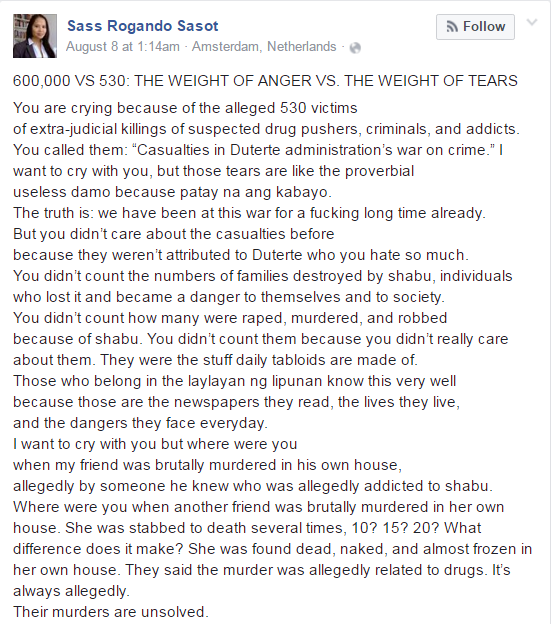 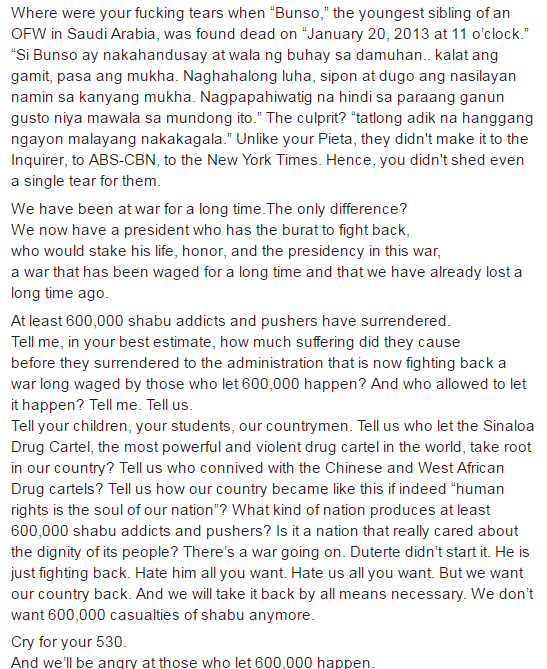 What are Extra Judicial Killings?

The Wikipedia defines extrajudicial killing as “the killing of a person by governmental authorities without the sanction of any judicial proceeding or legal process. Extrajudicial punishments are mostly seen by humanity to be unethical, since they bypass the due process of the legal jurisdiction in which they occur.”