Remember your favorite toy as a kid? For many generations, Barbie dolls are what young girls loved, and every year, these dolls have evolved and have put on a lot of make up. For the past couple of decades, another set of dolls became popular as MGA Entertainment created dolls that are even more elaborate in the image of Bratz dolls. These Bratz dolls eyes’ have tons of make up on, and lips that seem to have like those of Kylie Jenner’s, and it’s creating an image for young girls that this is what they are supposed to look like.

Until one day, a lady from Australia named Sonia Singh posted a Bratz doll she “made-under” on Facebook and it went viral. According to Little Things, Sonia loves to collect dolls even when she was a kid. She would buy old ones and recreate them to look like ordinary girls. She uses a nail polish remover to remove their make-up and then would carefully paint their faces into simpler, more realistic and beautiful ones. The result was simply beautiful that many moms wanted to buy one for their daughter. 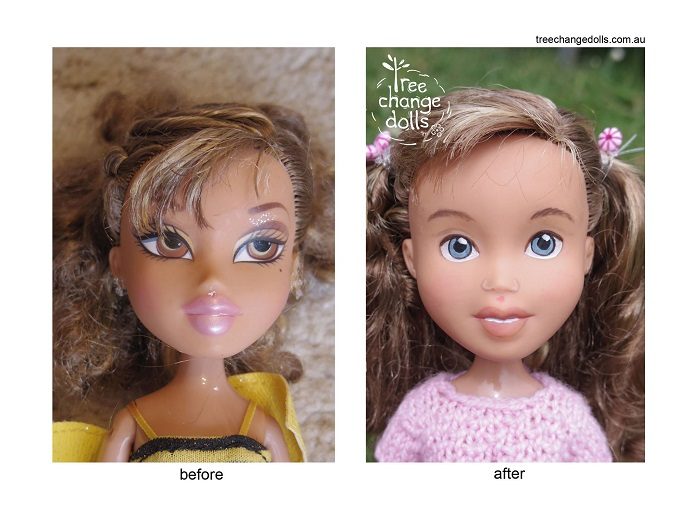 Sonia never intended for them to go viral. She only wanted to give a “fresh start” for the old dolls she finds in thrift stores in Tasmania, and give them a down-to-earth and more natural look.

I’m not a doll manufacturer. I don’t want to be, but if what I’ve done somewhat influences the big toy companies out there and make them rethink the kind of dolls they’re putting out in the market, I don’t think that would be a bad thing at all.

Currently, Sonia’s “Tree Change Dolls” are now being sold on Etsy and has become viral over the internet.

The first Bratz dolls were manufactured by MGA entertainment in 2001. They are a bit shorter than Barbie dolls at 10″ and have an “oh-I’m-so-bored heavy attitude expression” on their faces. Their heads are quite bigger than Barbie dolls and have pouty lips and really heavy make-up on. These dolls have been involved in a lot of controversy with a decade long lawsuit against Barbie manufacturer, Mattel. Many mothers also frowned upon the image of Bratz dolls with their skimpy and outrageous outfits.