Several men and women in business suits were forced to kneel on a bridge in Xiamen city in  Fujian, China as a way for them to apologise for missing their sales target.

Their personal details including their name, age, as well as what they did to “deserve” such humiliation were written in papers placed in front of them.

Pictures of the sales executives being publicly shamed were shared by a certain passerby named Zhu Ku and were also featured in several blogs across the internet. 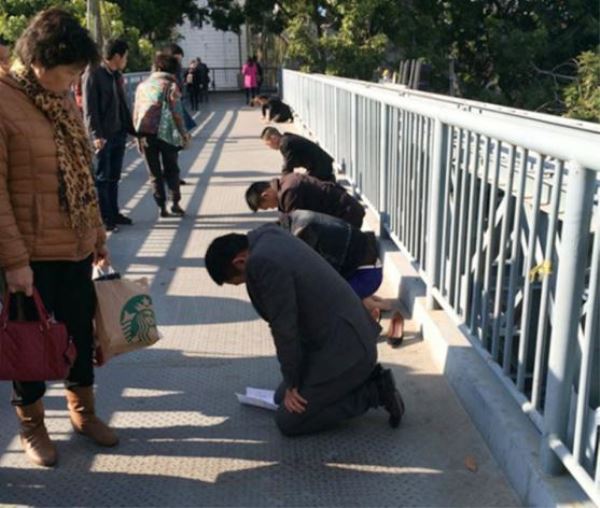 Ku, who witnessed the public humiliation of the employees, said:  “There was no indication what sort of company they worked for but it certainly doesn’t look like a fun one. After a while one of them decided he’d had enough and stood up shouting and grabbing a piece of paper and throwing it on the ground before marching off. But the others remained, calmly accepting their punishment.”

A 43-year-old sales executive named Zhen Liu had the message: “I failed to beat my sales targets.”

Meanwhile, 39-year-old Ming Chou’s message indicated that she had to kneel down for an hour because she did not finish her job.

As of press time, the company behind the public humiliation of employees is still undetermined.

Public Shaming of Criminals in China

In 2010, the Chinese government ordered the end of public humiliation of criminal suspects in the country. Such practice has been employed by the Chinese law enforcement but has sparked outrage among its citizens.

One of the most popular tactics used in public shaming is the parading of criminal suspects in public areas. In some cities, they circulate their names, addresses and photographs.

According to Mao Shoulong, a Public Policy professor from People’s University in Beijing, public shaming tactics will allow the police to solve problems outside the law.

“There are more modern tools for law enforcement. Besides, if these kinds of tactics are allowed, the police will get used to dealing with problems outside of the law,” he said.