As the 2016 National Elections draws near, aspiring politicians exert all efforts to promote themselves in every possible way.

Other than the usual campaign methods, some public servant wannabes take advantage of government  project billboards, banners, and streamers to endorse themselves.

Take for instance a certain politician in Mataas na Kahoy, Batangas, Philippines who had his name and photo included in a billboard for a market building project in the municipality.

The billboard specifically cites that the newly purchased lot will serve as the site for a market building in the future. A perspective of the market building was also included.

Mayor Jay Manalo Ilagan also had his name and photo included in the billboard. This is nothing new as we often see this in other government project billboards.

But there’s definitely more to the billboard than what it seems. Take a closer look at the photo. 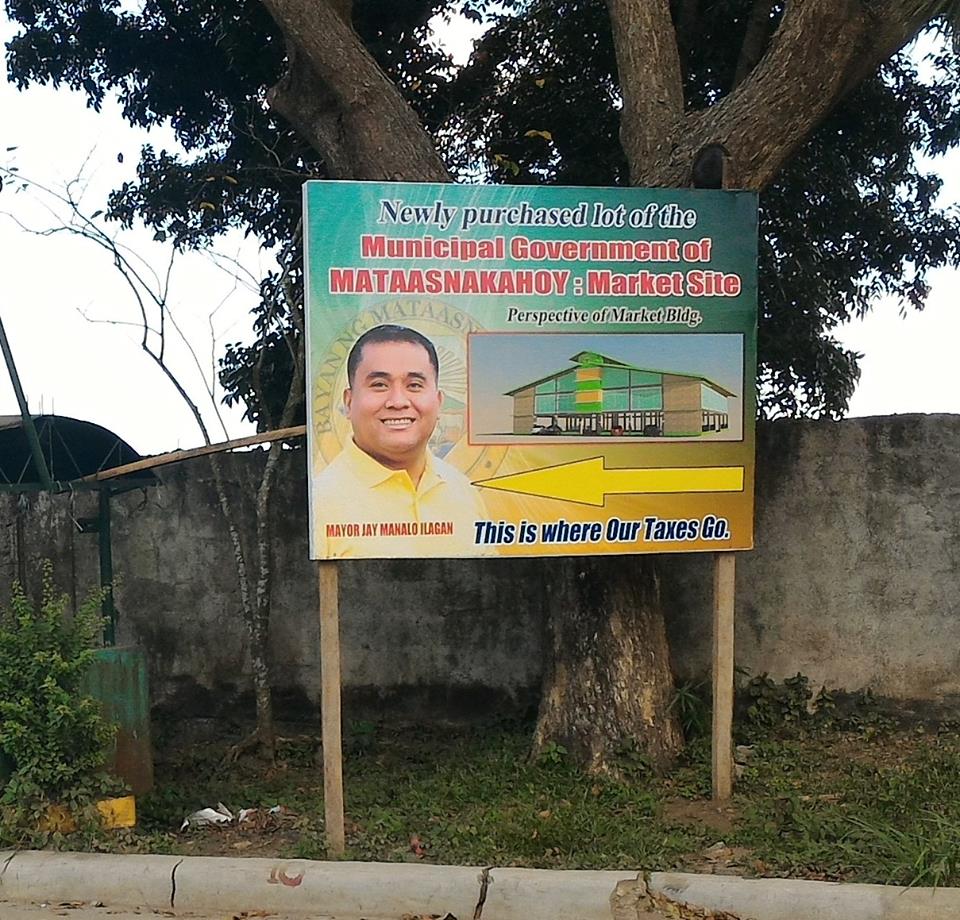 Apparently, the layout artist of the billboard committed a mistake in the positioning of the arrow. The phrase “This is where our taxes go” points to the photo of Ilagan. As a result, this glitch totally ruined the billboard as well as the reputation of the public servant.

In an interview with COCONUTS MANILA, Ilagan said that he just laughed off the glitch: “It was an honest mistake. Wala kaming naisip na masama about it, because we simply wanted to point to the direction of the market site.”

Furthermore, Ilagan revealed that the suppliers have already apologized for their mistake.

According to Ilagan, the municipality of Mataas na Kahoy is a DILG awardee of good governance. Moreover, Ilagan said that the municipality was able to pay off its debts under his leadership.

Kabataan Party-list Rep. Terry Ridon filed House Bill 4929 which will prohibit the act of naming government projects after government officials in the Philippines.

If approved as a law, those who will violate the provisions of the Act will face one year imprisonment and will be required to pay a fine of P100,000 to P 1 million. If the offender does a second violation, he or she would incur an additional absolute perpetual disqualification to hold office.