MANILA, Philippines- Almost 500 supporters of the late President Ferdinand Marcos have arrived at Padre Faura Street in Manila on Monday, October 17 after a four-day march from Ilocos Norte to Manila to rally for the state burial of the late strongman.

The “Kailian March”, headed by Governor Imee Marcos, was joined by Marcos loyalists and supporters, who earlier submitted to the Supreme Court a manifestation containing a million signatures supporting the former dictator’s burial at the Libingan ng mga Bayani. The group began their march on Friday, October 14 from Paoay Church in Marcos bailiwick and passed through Ilocos Sur, La Union and Pangasinan to meet with fellow supporters as they continue their journey to Manila. 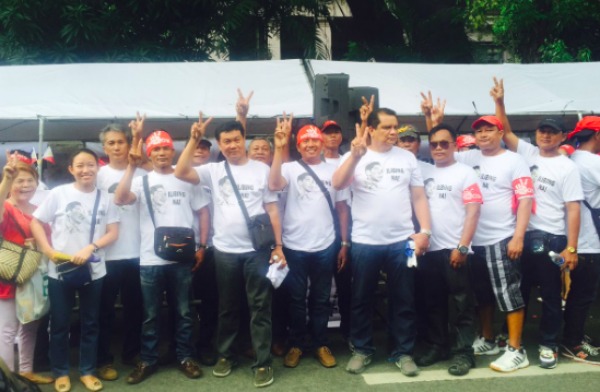 The supporters held prayer vigils in Ilocos Sur, Pangasinan and Tarlac and also visited the Tomb of the Unknown Soldier in San Fernando City, La Union.

The group gathered at the Supreme Court at around 8 am wearing black and white clothes as well as red bandana. They are expected to spend the night on the area while waiting for the court’s decision on the state burial of Marcos.

Victims of Martial Law and human right advocates have filed several petitions opposing President Rodrigo Duterte’s decision to give Marcos a hero’s burial, his campaign promise to the Marcoses and Ilocanos.

Due to human rights violations as well as state-sanctioned atrocities done by state forces under his administration, several groups have campaigned against the planned hero’s burial for Marcos. Moreover, they insisted that Marcos is not a war veteran and has a fraudulent war record as a soldier during World War II based on the study of National Historical Commission of the Philippines (NHCP).

Who can be buried at the Libingan ng mga Bayani?

Also known as Heroes’ Cemetery, Libingan ng mga Bayani is a Philippine national cemetery located in Western Bicutan, Taguig City in Manila established in May 1947. It initially served as the burial place of Filipino military personnel who rendered service during the World War II. Eventually, deceased national heroes, patriots, National Scientists, National Artists as well as past Presidents were buried in the cemetery.