MANILA, Philippines- Shocking images of a suspected snatcher’s body wrapped in a box and packaging tape found along EDSA has caused uproar among social media users after a certain Christine Jimenez Biteño shared them on Facebook on Sunday, July 10.

In the caption of the photo, Biteño revealed that they spotted the dead body just opposite a vacant lot before EDSA grand. Initially they thought that it was just garbage. After realizing that it was indeed a body of a dead man, they reported the incident to barangay officials, who immediately responded. 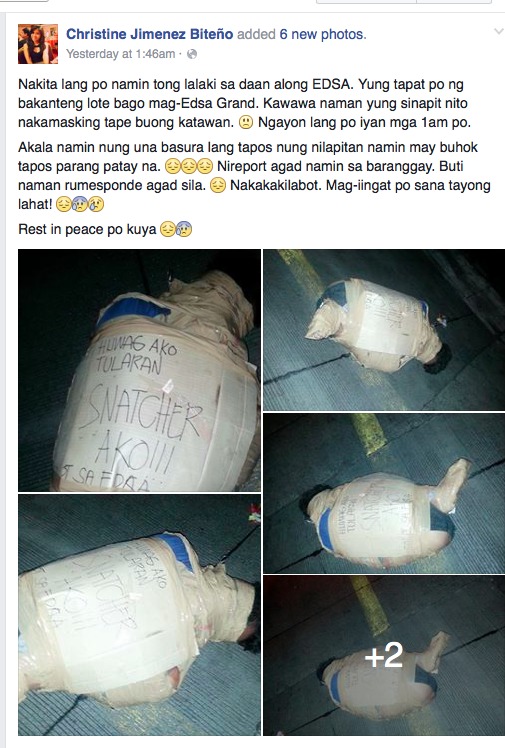 While several netizens accused the Duterte administration of unlawfully executing the victim and condemned the act, some speculated that other people may be behind the killing.

(If he’s a snatcher, why kill right away? The Duterte administration is open to the rehabilitation of pushers and addicts. What if he was just picked on or he had an enemy?)

On the other hand, others have expressed their support in the killing of suspected criminals to eradicate criminality in the country.

The rise in the killing of alleged criminals, mostly drug-related cases, has been observed even before President Rodrigo Duterte’s inauguration rites on June 30, 2016. In fact, the Philippine National Police (PNP) has recently revealed that four drug suspects are killed every 24 hours in police operations.

Senator Leila De Lima has recently expressed her intention to seek a legislative probe on the series of killings of drug suspects. The former Justice secretary said that Duterte’s crusade against illegal drugs is laudable but shouldn’t be done at the expense of human rights and process.