MANILA, Philippines- When his Facebook post criticizing then presidential aspirant Mayor Rodrigo Duterte went viral in November 2015, many supporters of the outspoken mayor vowed not to forget his words.

In his Facebook post, Eliaquim “Jack” Labang, an international pastry chef and proprietor of Quim’s cake, announced that he will give P5 million-worth of cakes for free if Duterte wins the presidential race. Labang accused Duterte of being a liar after the latter decided to run for the nation’s highest office despite his earlier claim that he was not interested in joining the race.

(You said you weren’t running. You’re a big liar. You’re already lying even if you have not become the president. Let’s just engage in a fistfight.) 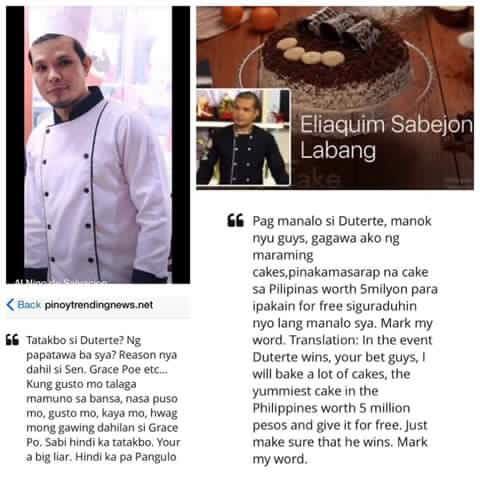 The pastry chef even dared supporters of the tough talking mayor of Davao City that if their bet wins, he will give free cakes worth P5 million.

(If Duterte becomes the president, I will create delicious cakes worth P5 million and give it for free. Just make sure that he’ll win the race.)

Now that Duterte is just a few hours away from being declared the victor in the 2016 Presidential elections, Labang is expected by netizens particularly Duterte supporters to keep his promise.

In his recent post on Facebook, Labang announced that his shop will indeed be giving away P5 million-worth of cakes in celebration of our new leaders’ victory. Below is a list of their sampling schedule. 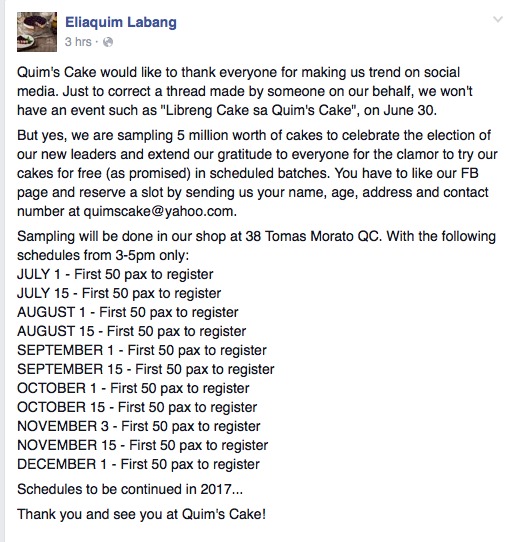