A group of inmates in Parker County Jail in Parker County, Texas, broke out of their holding cell to save a guard who was suffering from a heart attack – and saved his life!

According to reports, the inmates who were shackled and wearing handcuffs were waiting for their turn in court and were under the supervision of a lone guard (who refused to be named) when they noticed the officer suddenly slump down towards the floor.

As can be seen in the CCTV footage later released by the office of Parker County sheriff’s Capt. Mark Arnett, as soon as the officer slumped down, the inmates shouted for help and banged the iron bars holding them in place but it was immediately apparent that no one was going to aid the guard since the jail room was far from the courthouse and other places where there could be other people who could hear their calls.

So, as one, the inmates decided to break out of their holding cell to help the officer. The ruckus they made soon attracted the attention of other officers in the building – and things could have gotten crazy, especially because it would certainly look like they had bust out of jail and overpowered the guard. 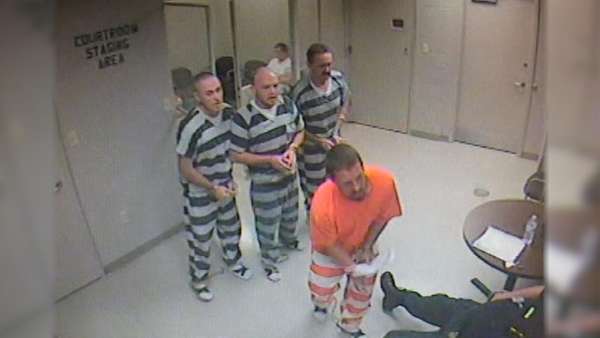 Thankfully, the officers who arrived first assessed the scene before firing any shots. One of the officers quickly corralled the inmates back to the jail cell while others performed CPR on their comrade on the floor.

Medics also arrived and the officer was saved. It was clear to everyone that the officer’s life was saved by the inmates’ actions since it would have taken at least 15 minutes before someone came down to the jail to check on the inmates. He could possibly have died if the inmates did not break out of jail.

Ironically, after the incident, the jail was reinforced to prevent a repeat of the incident – we could only hope that, in the future, no one suffers a heart attack while on duty because the inmates wouldn’t be able to help that officer since it would be difficult for them to bust out of their jail cell then.