In her Facebook account, the OFW said that it was her first time to encounter such kind of room in her eight years of stay in the country. Her employer’s residence is located near Central. 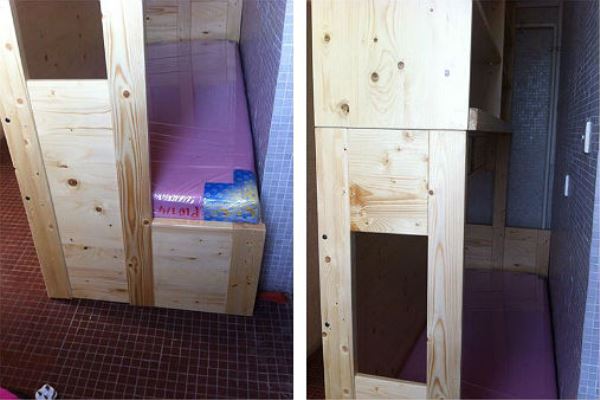 Sleeping is like lying down in a coffin, according to the Filipina worker who wants to remain anonymous. She compared her narrow bed into a “cabinet with a bed” as the bed has a wooden wall on its side. Moreover, the bed is pushed up against the wall of the room on the other side.

The area beyond the “bed-cabinet” combo is actually not part of her sleeping quarters. Also, there’s a washing machine next to her bed.

The Pinay domestic worker had to endure back pain and discomfort because she needs a job.

“It seems I always have nightmares every time I go to my bed and of course I need to sacrifice or endure the back pain. I can’t move properly, I can’t even stretch [out my hands].”

Although there were many reported cases of abuse of OFW’s in Hong Kong in the past, there are some Pinoy workers who found their success in the country.

In the ABS-CBN show “My Puhunan”, two OFW’s shared how they found their luck in Hong Kong.

Manny Portugal went to Hong Kong to work as a janitor in 1991. Every month, he would save 1,000 HKD for his dream business. Eventually, he was able to save 30,000 HKD which he used to start a company called Backstage Productions.

Now, his company offers services to Filipino-organized events as well as international events and concerts in Hong Kong.

Aside from hosting the radio program “Lovingly Yours, Tita Kerry” on AM 1044 Metro Plus, Paragas runs a one-stop shop for Filipinos in Hong Kong.