A photo of a dead dog being dragged on the road by its evil owner’s car is making rounds in the Internet.

The controversial photo, which shows a dead Alsatian cross-breed dog, was apparently taken in Guyanas in Western Ecuador. The right leg of the dog was tied to the back of car which was dragging it at around 40 mph. Its head and body were being scraped as the car moved. 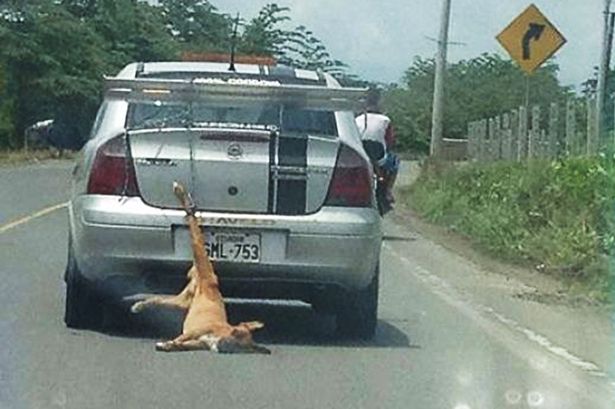 However, reports have not yet confirmed whether the dog was already dead before or after it was tied to the car.

A certain Beatriz Alban posted the photo on social media and wrote: “Please, share. This wretch must pay for their evil deed, and the world should know all there is about who he is and what he does.”

Police are now trying to track down the owner of the car with a license plate ML 753.

“We are aware of the photo and incident and are investigating the car owner, who has not yet been identified,” said a spokesperson for the police.

Reporting Animal Cruelty in the Philippines

Cruelty to animals refers to the human infliction of harm and suffering to animals.It takes various forms including neglect and direct violence.

Some forms of animal cruelty include neglect, industrial animal farming, active cruelty, and direct violence. It can also be observed during bullfighting, TV and filmmaking, training for circus performance, cultural rituals, and in unnecessary experiments and demonstrations.

In the Philippines, you can report a case of animal cruelty such as killing of dogs for meat. You may contact the police hotline at 117 or you may report the incident to your barangay officials.

Remember that no charges can be filed without a willing witness. The Philippine Animal Welfare Society (PAWS) requires the following information to prosecute criminals.