It is sad that there really are a lot of people living in the streets, but it is truly sad that there are many children who also have to be homeless. What’s disheartening is that this happens even in countries where they have to also deal with the freezing cold.

Recently, the heartbreaking photo of a homeless boy eating food from a box in the street went viral. Taken in Dublin, Ireland, the picture sparked widespread outcry on social media for the local officials to act on the homeless situation in the area, particularly because winter is coming soon.

Posted by The Homeless Street Café, the picture shows 5-year-old Sam eating carbonara from a box given by the café to the homeless people in the area.

“We are home after another incredibly busy night. I’m exhausted, weary and emotional and should (guiltily) go to bed BUT there is an image burnt in all the teams minds tonight. It’s wrong and it’s distressing but this IS happening and it’s only getting worse each week,” the post read.

“’Sam’ is 5 and this was him eating a dinner of carbonara tonight sitting on a sheet of cardboard. Can we really accept this?” 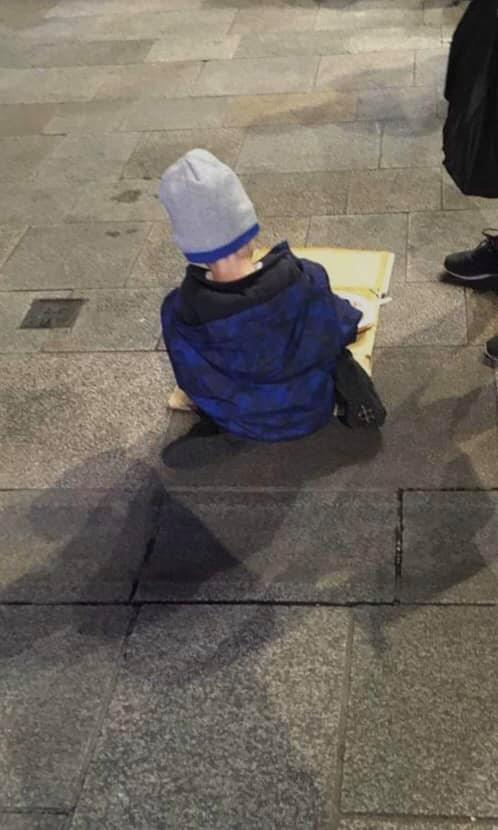 Netizens felt angry that this has to happen, blaming local officials for not providing enough for the needs of its citizens.

With temperatures plummeting to sub-zero, many netizens expressed concern over the boy’s welfare. No one wants to see him freezing in the cold! Thankfully, the page later updated that the boy and his mother actually found emergency accommodation and the kid is in school.

Sadly, most homeless shelters prohibit cooking; thus, Sam and his mom continue to visit The Homeless Street Café for food. Aside from nutritious food, the voluntary group also provides toiletries, clothes, and other essentials to homeless people in central Dublin every Tuesday.

Many thanked the charity group for doing this to the homeless people, with many also reaching out to offer help in other ways they could. There were several people who planned on sending food, clothes, toys, and other items for Sam and other kids who get their food from the charity group.

“Saddest picture I‘ve seen in a long time. To think this is real life for so many unfortunate people. Well done for been so strong to do what you do and see what you see night after night. You and your team are amazing human beings,” a netizen wrote.

“Hiya is there any way we can donate to help this little boy’s family? I’ve toys and clothes and jackets, duvets and covers, I would love to pass them on to this little boy??” another offered.

Everyone is hoping that the kid would find a better place to live and have enough food to eat. Sadly, he is just one of the thousands of kids living in the streets all across the world…

A homeless shelter is a type of service agency that provides temporary shelter for homeless people. This is done to keep them safe, particularly in places where the weather could be so harsh. Many homeless shelters also provide food and clothing for those who seek help from their facility.