A guy named Pablo Reyes recently received a lot of attention on social media. This is after thousands of Facebook users saw a status he posted towards the end of last year which contained predictions for 2016.

“Call me crazy but in 2016, Hilary Clinton will be the first female president, the world will go crazy over the death of a gorilla, Prince will die, Muhammad Ali will die, Kimbo Slice will die, Donald Trump will die. The USA will experience the worst mass shooting… I’m not trying to scare anyone, but you’ll remember my name.”

As of this writing, the post has received over 206,000 likes and 247,000 shares. Clearly, people are blown away with his unusual ability to have foreseen the future. 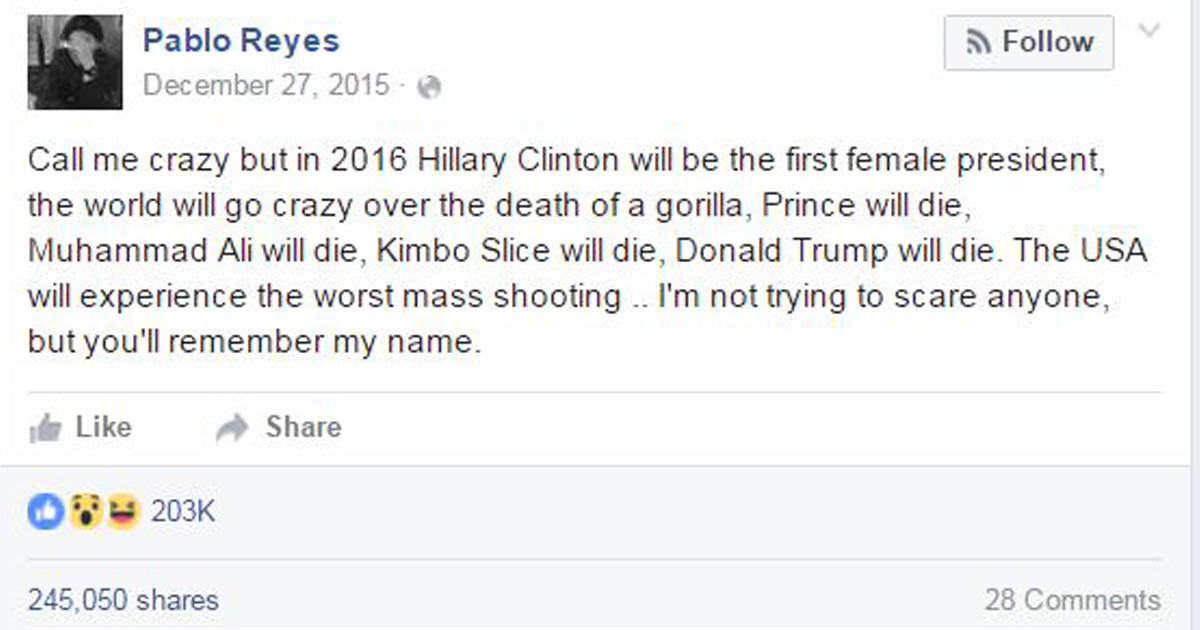 Of course, it should be noted that some of his predictions did not come true yet, namely Hilary Clinton winning the presidency and Donald Trump losing his life. Still, the others he mentioned have already been fulfilled namely the deaths of Prince, Muhammad Ali, Kimbo Slice, and Harambe the gorilla, along with the recent Orlando mass shooting.

However, some keen-eyed folks over at the Mirror were quick to point out that Pablo’s psychic skills is actually fake – all it takes is to do a simple Facebook trick. The blog revealed:

“All you have to do is write a status on your wall as usual.

But before posting, select the clock icon and set the date – which can be any time in the past (or you can schedule it for the future.)”

Once you’re done, just hit the Post button and you’ve already come up with your own “prophecy.”

So yes, Pablo Reyes is no psychic – he’s just a guy who knows his way around Facebook. We definitely feel bad for the gullible ones who immediately believed him.