The Bureau of Internal Revenue (BIR) is reportedly infuriated with social media sites Facebook and Twitter for allegedly not paying the taxes due to the Philippine government, reports Yugatech.

According to the article, the BIR aims to hit its Php1.46-Trillion target collection; thus, is trying to do its best to make citizens and corporations pay every single cent of the taxes they owe the agency. Ever since Twitter and Facebook began operations in the country in 2009, some Php350 million worth of transactions have been made on the sites, estimates Commissioner Kim Henares.

So, is there any truth to this issue? The issue seems legitimate but delving deeper, don’t you think it is too much? Although Yugatech never mentioned that the article was a joke, just check the tags – you’ll find one “april fools joke”; and the article was posted on April 1. 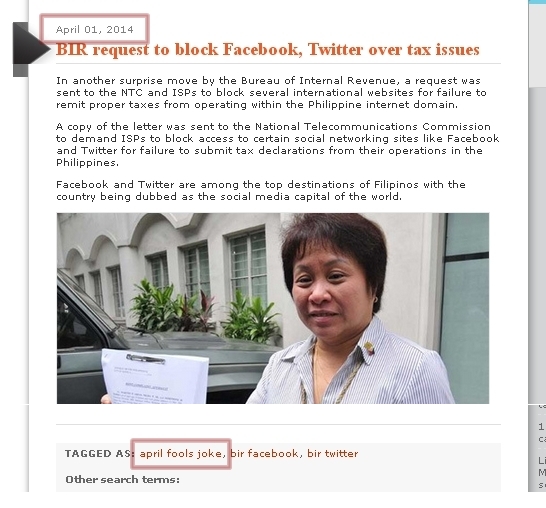 Judging from the number of shares (more than 46k) and the number of angry comments on the article, though, it is easy to deduce that many of the readers took it at face value. Lighten up, guys! It was just a joke.

We can understand your sentiments, though; Commissioner Henares is infamous for her aggressiveness in collecting taxes, planning tax schemes for the poorest of the poor (farmers, fishermen, sidewalk vendors, etc.) or going head to head against famous entities like Manny Pacquaio.

So, did you get the joke the first time around or did you just learn about it now? Don’t worry if you thought it was true – we were also angry up to the moment we saw the april’s fool tag!