Snatchers prey on unsuspecting victims and, more often than not, the victims are not able to recover the stolen items. This is the reason why a recent snatching victim decided to buy her phone back from the snatcher – as crazy as that might sound – just so she would not lose it forever.

Right after her mobile phone, a Samsung Galaxy J5, was snatched from her hands, the thief quickly ran away as fast as he could but Katherine, who had experienced a previous snatching of another unit, had to think quickly if she wanted to get this one back.

So, she shouted to the thief to stop, telling him that if he was going to sell it to another person anyway, he might as well let her buy it, to save him the trouble of finding a buyer. The thief was clearly taken aback by the offer because he halted on his tracks and asked how much Katherine was willing to pay for the phone.

Quickly, Katherine said she’s willing to pay Php1,000 ($21.50) for the phone but the snatcher told her his price is Php2,000 ($43.00). Thinking that her sim cards are more important than the snatched phone, Katherine told the thief she’s just going to buy the cards and he could have the phone.

The thief, however, was in a hurry; thus, he agreed to Katherine’s original price of Php1,000 ($21.50), for the phone and sim cards. The crook was smiling while they exchanged hands and although she was terrified, Katherine tried hard not to show it to the criminal. 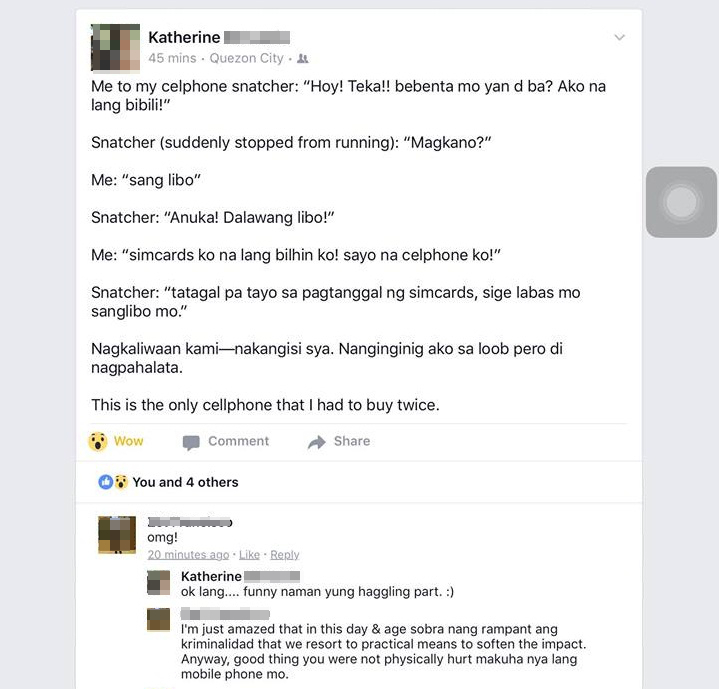 Despite having to buy her phone twice, from the store and from the crook, Katherine was still quite lucky because 1) she was able to retrieve her phone even if she had to pay for it and 2) the snatcher did not double-cross her by snatching the phone again or even her bag after the deal!