For many people, receiving blessing and prayers from a religious figure such as a priest or pastor is considered as something wonderful which could help them feel better or receive more blessings in life or help them achieve their dreams and aspirations.

But there are unscrupulous individuals who use that fact to take advantage of other people. Take for example the fake monks who had recently been spotted in Baguio City. These fake monks even come in full costume although they look somewhat weird in cowboy hats.

According to a report on The Cordilleran Sun, the fake Buddhist monks are roaming the streets of Baguio City, putting bracelets or ‘prayer beads’ around the wrists or necks of unsuspecting victims. Afterwards, they charge their victim with at least Php100 to Php500 – and they are so aggressive they would not even accept anything lower than Php100. 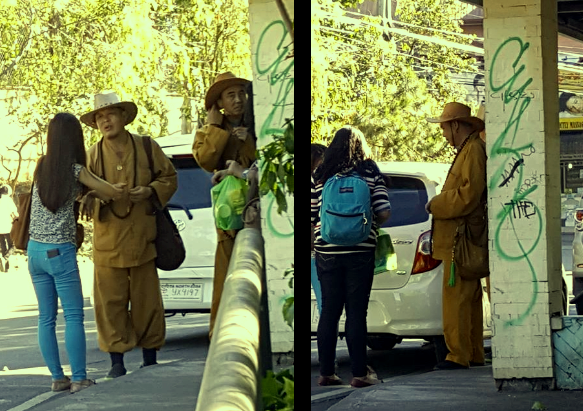 The report mentioned that these ‘monks’ usually approach young people, particularly students, who are easier to manipulate. To date, the fake monks have been spotted along key Baguio City tourist spots and major roads.

The Cordilleran Sun reminds the public to stay away from these robed men because they are scammers. According to the new site, “If these men are genuine devotees of Buddhism, they should be spreading the belief system’s teachings, not trying to siphon away money from people.”

Everyone is reminded not to let these fake monks put their ‘prayer beads’ around them and if the men happen to become aggressive, victims should immediately call the police.

We do hope that these men get arrested so they would stop preying on unsuspecting victims who are forced to part with their money in fear of the ‘monks’.