Here’s good news for members and pensioners of the Social Security System (SSS) in the Philippines: Pres. Rodrigo Duterte has finally approved a pension hike although it will be just half of the Php2,000 the people are hoping to get.

In a press briefing at the Malacañang Palace on Tuesday afternoon, Presidential Spokesperson Ernesto Abella revealed that the president has approved a pension of hike of Php1,000 which would take effect starting this month, January.

Meanwhile, a pension hike of another Php1,000 will be added in 2022. But while pensioners have to wait for 2022 to get the full Php2,000, getting Php1,000 starting this month is already something that would surely make the pensioners happy. 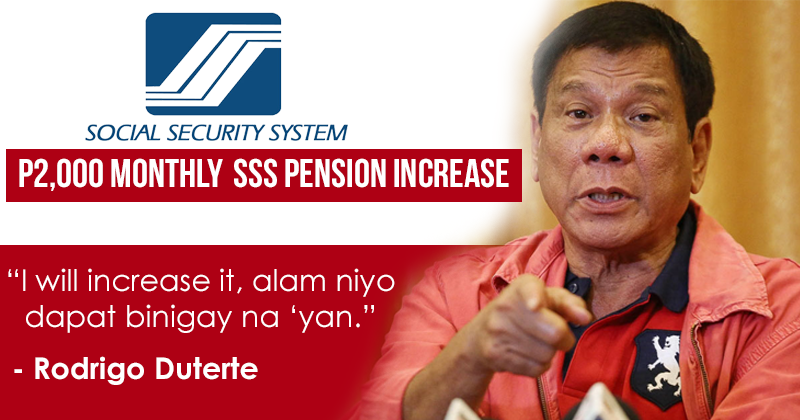 Some months ago, Duterte’s economic managers announced that the Php2,000 pension hike will lead to the agency’s doom but the president pushed them to find a win-win situation.

So, why was the pension hike approved? It seemed that the news is not all good news. While pensioners will get the Php1,000 hike this month and another Php1,000 hike by January 2022, there will be an increase in the premiums to be paid by active members.

According to Abella, starting May 2017, active members will have to pay an additional 1.5% of the current premiums they are paying. It is expected that the agency will release a new table of premiums to guide its members soon.

SSS chair Amado Valdez thanks the president for his “sense of caring for our pensioners”. He also revealed that the president had ordered them to go after employers who failed to remit their employees’ contributions.