Home
News
World News
Doctor in Bikini Saves Man’s Life at the Beach, Gets Called Out for ‘Unprofessional Attire’

A doctor in bikini saves a man’s life at the beach but gets called out for her ‘unprofessional attire’! Tsk. Tsk. The story went viral, with many people taking this doctor’s side, knowing she was just trying to save the man’s life – who cares if she wasn’t wearing ‘proper doctor’s attire’!

Dr. Candice Myhre, from Hawaii, saved a man who got into an accident while she was surfing nearby. The swimmer had been hit by a boat and was nearly drowning out at sea as he lost consciousness.

Myhre, who also happens to be an Emergency Medicine Physician, rushed to the man’s side, plucked him out of the sea, strapped him to her surfboard, and dragged him to shore. Then, she tied his wound using her own rash guard, then stabilized him in 1 hour as they waited for the rescue helicopter to airlift him to the nearest hospital. 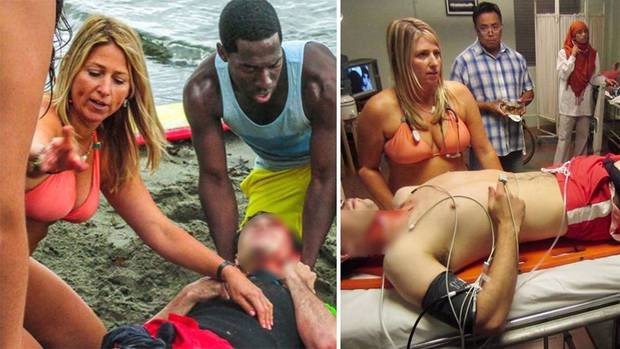 Because she was wearing bikini at the time, she got called out for the ‘unprofessional attire’. This angered many netizens who lashed out these people for dictating what doctors should wear, especially when she was just trying to save someone’s life.

She was on a holiday and, technically, didn’t have to do it because she’s not on duty, yet the doctor knows that she has to save the man’s life, whether she was on duty or not. She made an oath to save people’s life – and that means doing so even when she’s off duty!

What is the #Medkini Challenge?

Published on the Journal of Vascular Surgery’s August 2020 edition, a controversial study claims that those who work in the field of medicine, particularly doctors, should not post photos on social media while they are wearing ‘inappropriate attire’ such as bikinis and fancy dresses.

The study claims that such photos are deemed as ‘potentially unprofessional content’. But a lot of doctors and even netizens disagree, saying that what these professionals wear would surely not have any bearing on how they treat people!

This gave rise to the #Medkini challenge where medical professionals shared photos as they wear bikinis or other swimwear that the study finds to be ‘inappropriate’!