A 2-year-old boy in Brazil has shocked his family when he sat up in his coffin to ask for a glass of water!

According to reports, Kelvin Santos was pronounced dead at the hospital after battling pneumonia. He was confined at the Abelardo Santos Hospital in Belem, Brazil but doctors pronounced him dead at around 7PM one night.

His grieving family brought him home where they held a wake. But two hours before his funeral, the boy suddenly sat up in his coffin and asked for a glass of water! Whoa! 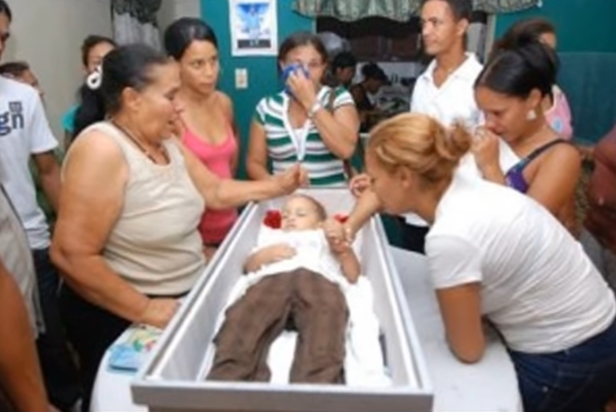 Witnesses reported that the boy’s father, Antonio Santos, had been crying by his son’s coffin. The grieving dad called out to the boy, saying, “Son, come back to daddy.”

Much to their surprise, the boy awoke!

“Daddy, can I have some water?” the boy reportedly said as he sat up and opened his eyes.

The shocked family immediately got the boy a glass of water but after taking a sip, he fell back into the coffin with his eyes closed. Hoping they could still revive the child, the family rushed him back to the hospital but he was declared dead the second time around.

But the family was quite sure that the boy had been alive and well in those precious seconds; thus, Antonio plans to sue the hospital for medical practice. The hospital staff stood by its first verdict, however; they said that the child had really been already dead the first time they declared him dead but they could not offer an explanation as to how he came back to life before the funeral.