When driving, always be on the lookout for people who are planning to cross the street – but there might be times when you also have to watch out for those who are trying to fake an accident to get some money from you.

Take for example this woman in China who tried to fake an accident. Thankfully, the driver noticed her plan – and had a dashcam as proof of the scam just in case she tries to bring the matter to court.

In a clip that has gone viral on 9GAG, the vehicle’s dashcam recorded the exact moment a woman laid down in the middle of the street as she saw the car approaching. Because the driver noticed what the woman did, he slowed down. 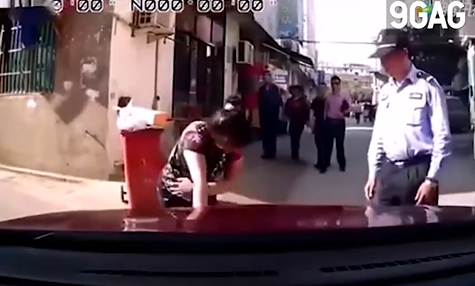 Other vehicles also noticed the woman and swerved away but she had her eyes set on the approaching car.

Not wanting to get in trouble, the car driver slowly backed away so he could escape from this scammer but the woman was enraged that the car was driving away. She got up and chased the car, banging the hood and telling the driver he hit her. Of course, he didn’t.

He continued backing away and she chased the vehicle, repeatedly going down to supposedly re-enact what happened. Armed with proof of her stupid modus operandi, however, the vehicle driver ignored her even when a policeman went closer to check on the matter.

The cop just shook his head and went away, knowing the woman wasn’t hit at all. Eventually, the woman went away and the driver drove off in peace. She’s actually lucky the driver didn’t hit and kill her!

It seems that the incident is quite common in China, based on comments netizens made on the video.

Do Drivers in China Choose to Kill Injured Pedestrians?

Multiple news sites have covered the supposed ‘hit-to-kill mentality in China wherein drivers who accidently hit a pedestrian would try their best to roll over the injured person to make sure he’s dead.

According to the Business Insider, this happens because there’s a law in China that makes drivers pay for the pedestrian’s medical bills – and this does not stop with the injuries sustained during the accident but even those incurred in the future!

Because this entails a lot of money, drivers prefer to kill the pedestrians so they would only have to pay once.