Home
Videos
Viral Videos
Artist Gets Voted Off on Reality Show, But Judges Quickly Apologize When They See Her Final Piece

A Swiss artist who tried her luck on Switzerland’s Got Talent has caught the interest of netizens not just because of her awesome skills, but also because of how the judges reacted.

Corrine Sutter, an artist who draws portraits in a caricature form, didn’t seem to impress the judges with her sketch of Gilbert Gress, one of the show’s judges. Given only a few seconds to captivate the judges, Sutter failed to do so and got voted off. 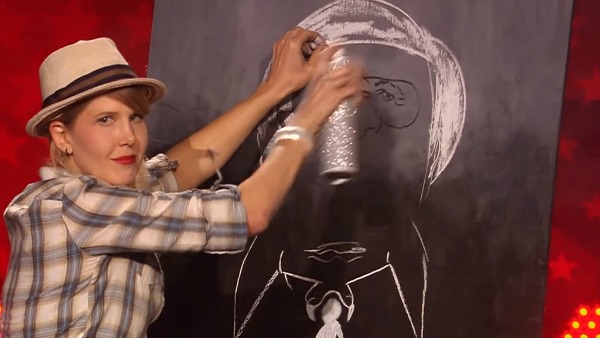 However, Sutter stayed on stage as if she wasn’t out of the competition.

Even after hearing the sound of the red buttons, Sutter continued finishing her portrait. She then flipped it upside down and blew a powder on top which revealed a detailed caricature of another judge, Bligg Zusammen.

Despite initially getting a thumbs down from all the four judges, Sutter received a standing ovation and got the chance to move on to the next round after three judges gave their approvals.

Indeed, art cannot be rushed. It takes time to create beautiful things and time is what Sutter didn’t have when she decided to audition for the show. Nevertheless, her talent compensated for her failure to impress judges within a certain time frame.

Tips to Impress Judges on Got Talent Shows

Every year, thousands of talented people audition for the show hoping to get a shot to fame. America’s Got Talent creator and judge Simon Cowell has some tips for aspiring contestants.

Here are some of them:

For variety acts, it is recommended that contestants submit a 90-second video clip of their performance so that producers will have an idea of what you would perform.

Dancers are encouraged to perform one or two songs for the audition rather than a medley of songs. You should also incorporate new tricks and unique choreography to capture everyone’s attention.

On the other hand, singers will only be asked to sing a verse or chorus of a song so choose the part that perfectly shows off your vocals. You should avoid singing originals and be prepared to sing acapella.