A cheeky little girl has stolen the show when she joined a group of cheerleaders in a half-time performance.

The 2-year-old girl melted hearts as she joined the cheerleaders, at first looking shy but later on warming up as she followed their moves in the half-time performance. 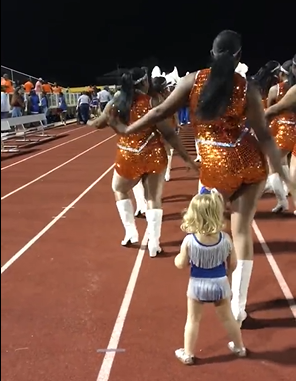 It looked like the group had started near where she and her family were sitting. So, she didn’t miss the chance to have fun by following their movements. She marched to the rhythm, swaying her hips along with the much bigger ladies but she didn’t shy away. Instead, she tried to catch up with them as they marched forward.

She began to copy their movements and shook her hips just like the ladies. It was quite clear she was having a good time as she would sometimes look back at her family but she had a big smile on her face the entire time she danced with the cheerleaders.

There were a couple of times when the ladies nearly hit her as they danced since she was at their back but the ones near this adorable girl smiled at her and even let her join in on the fun by prompting her to move. It was really cute. 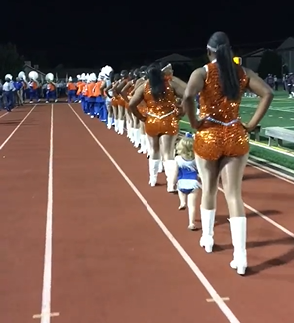 But while most people loved the little girl’s adorable performance and commented how it was great to be young and full of fun again, many called her a spoiled, entitled brat who thought it was alright to ruin a great performance by joining in even if she was not part of the cheerleaders.

The cheerleaders certainly appeared to not think of it that way but many still bashed the girl and her mom who could be seen encouraging her to join the dance. Others also expressed concern that she could have gotten herself injured had she tripped one of the ladies and they fell on her small body!